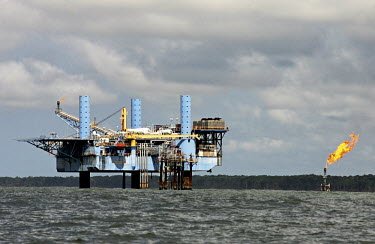 Port Harcourt — Investigation into the January 16, spills near Funiwa offshore facilities off the coast of Bayelsa State has taken environmentalists, regulators and the state government beyond Chevron facilities to nearby Auntie Julie platform, operated by Conoil.

The team, on two occasions visited communities affected by the oil leakage in Koluama and Sangana, Southern Ijaw Local government continued in its effort in tracing the source of the leakage.

They took samples from the polluted sites for laboratory analysis in a bid to arrive at an evidence-based conclusion.

Prior to the visit, community leaders confirmed sighting Conoil’s jackup rig at the spill site. Secretary, Sangana Chiefs Council, Chief Ayebatonye Zagiri, said Conoil had brought a Jackup rig to the location where the spill occurred.

“Without notice, Otis Jack up barge just rushed in and hang up at a location where our people suspected to be the spill point. They tried to do work over there. We also identified it as Otis Jack up rig that propels itself. It doesn’t need vessels to pull it here or there.

“But this is Conoil field. This spill has been tormenting us, damaging our fishing gears for close to seven months, because it all started last year. The recent one (the one reported to have occurred on 16th January, 2021), just damaged and devastated our gears.”

SSA to the Governor Douye Diri on Oil & Gas, Mr. Timi Seimiebo, regretted that the entire coastline was condemned with crude oil, as dead fishes and other aquatic animals were seen floating on the bank, while calling on the Federal Government to prevail on Conoil to do the needful.

Asked if he suspects foul play from the oil companies, the SSA said, “Very big foul play. If there is a spill, what stops you from owning up and identify with the victims? They came and repair it without even consulting DPR, without state government; with the aid of security personnel. Now you can see that we want to go to the place (Conoil facility), we cannot even access it. The laboratory analysis of samples will testify.

“See how they are treating us. By the time community come after them, they will send the military to kill our boys. We will stand tall to testify and defend our communities. We will defend them to the letter, in this particular case. The crude oil spill belongs to Conoil. It is very clear. They are just shading it. But it has shown to the world that the spill belongs to them.’’

Meanwhile, the Environmental Rights Action/Friends of the Earth, ERA/FoEN, says it was unfortunate that the spill has once again, exposed how oil companies operating in Nigeria play the oil politics; short changing host communities and those impacted by their operations.

“The good thing is that there is the finger print technology and, this presents another litmus test as to whether the Federal Government would allow this matter to be swept under the carpet. Interestingly during the visit to Sangana, NOSDRA took samples on the shoreline and elsewhere in the community.

“A responsible government would take the bold step and follow this to logical conclusion. This, the Federal Government can do as a confidence building mechanism and in the interest of peace in the Niger Delta.

“This is more so, as Nigerian victims of the oil industry induced pollution are seeking justice outside the shores of the country. Rogue oil companies should be identified and punished.”

Also, an environmentalist and Head of Field Operations, ERA/FoEN, Mr Alagoa Morris, who was part of the investigation team, said the team beamed its searchlight following a reported leak at the Conoil field which was yet to be plugged to verify if the spillage polluting nearby communities had links with the facility.

Morris said if oil companies continue to dodge responsibility like Conoil, more violent conflicts would erupt in the Niger Delta anytime, as such conflict could only be averted when the oil firms act responsibly.

“During the visits of 22nd and 26th January, 2021 by the fact finding team, impacted fish nets were seen at Koluama 1 and 2, including samples of the crude oil collected by community folks at the water front of the community. Also at Sangana, Crude oil washed ashore was observed all along the coastline, including some dead fishes and crabs.

“These observations left no one in doubt that there was an oil spill in the environment. Sadly and, most regrettably; the oil companies operating in the environment offshore are trying to take advantage unduly of stakeholder’s offshore accessibility.

“Trying to dodge responsibility knowingly is criminal and, any corporate body caught should be punished adequately to serve as deterrent to others. This is also why the NOSDRA Act should be amended to give bite to the regulator, as regulatory capture is unacceptable. The operators cannot self-regulate themselves.”

Fishermen around the Atlantic Ocean coastline had on January 17th 2021, raised the alarm after sighting oil leaks suspected to be from the Funiwa fields following the leakage of the previous day.

However, the operators in the area, namely Conoil, Chevron and First E&P denied responsibility for the leakage.