on: November 29, 2020In: featured, Oil
…Full production to return in one week 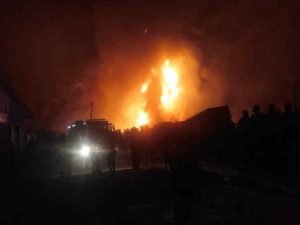 Port Harcourt — The explosions, which rocked an oil field in Bayelsa State last weekend, has cut the Nigerian Agip Oil Company’s oil production by 30,000 barrels daily, the company has said.
Multiple explosions last weekend rocked the oil facility operated by NAOC, the Nigerian subsidiary of the Italian multinational company Eni, and another facility belonging to Shell Petroleum Development Company, SPDC, at Ikarama community in Yenagoa Local Government Area of Bayelsa State. The cause of the explosions is yet to be ascertained.
Eni’s External Communication and Media Relations, Sub Saharan Africa, Marilia Cioni, said the explosion would adversely impact crude export to the tune of 30,000 barrels daily, of which Eni’s share amounts approximately to 6,000 barrels per day.
Cioni, in a statement, said preliminary checks at the facility indicated that vandals used explosives in the attack, blowing up two vital pipelines and prompting the shutdown of oil production at the field.
“We confirm two sabotage events by means of explosive devices, which damaged two pipelines in the swamp area, in the night between Friday 20th and Saturday 21st November 2020.

“Production was stopped immediately after the event, consequently the emergency response team has been mobilized and able to contain the spill, with booms few hours later” the statement read.
Eni also disclosed that repair work, oil spill recovery and clean-up were currently ongoing, while resumption of full production was expected in one week time.
“Impact on production is estimated at 30,000 barrels of oil equivalent daily (boed) of which Eni’s share amounts approximately to 6,000 boed.
“Force majeure was declared on Brass terminal to notify contractually the export tankers about the delays in the lifting schedule of about one week on the original plan.
“Regulatory agencies and Government security agencies have been notified and are investigating,” the statement further stated.