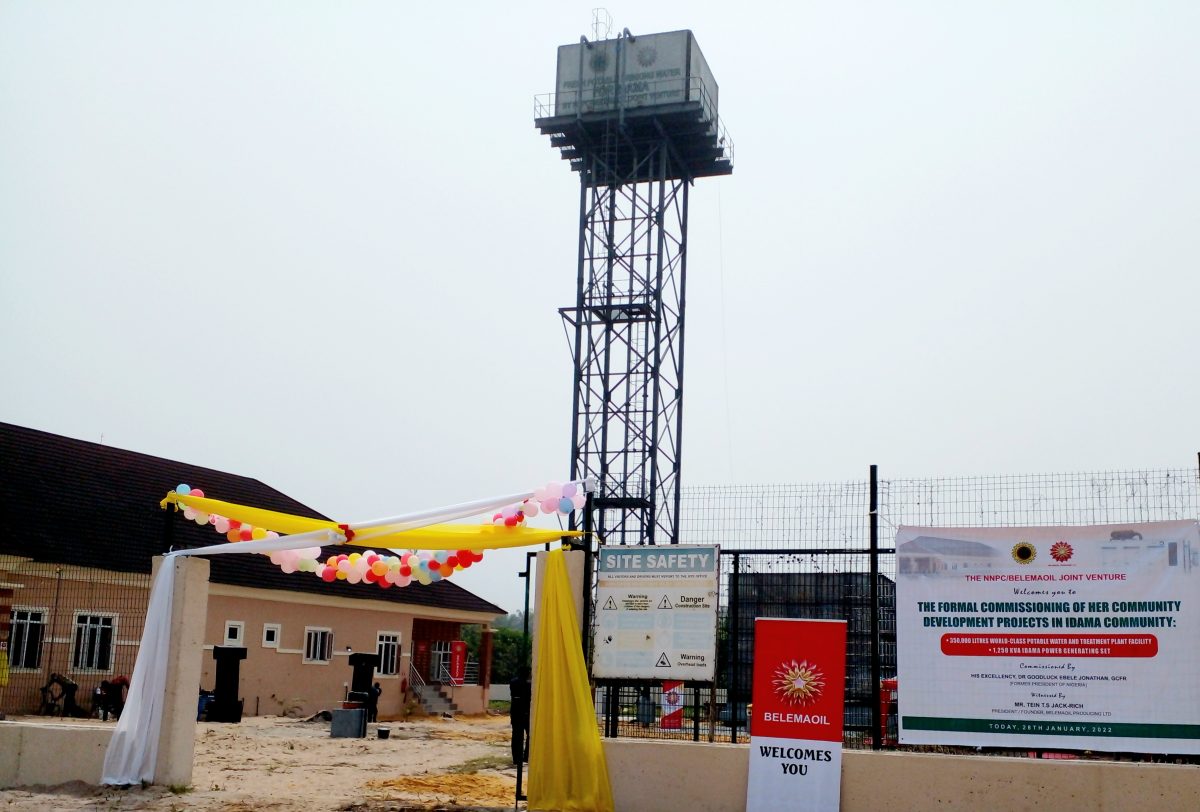 The projects, 1,250KVA generator and 350,000 litres capacity water facility with a water treatment plant, was commissioned by former President Goodluck Ebele Jonathan, and witnessed by the Group General Manager of NAPIMS, Bala Wunti and other stakeholders.

Speaking, the former President assured of continous support to Belemaoil and its founder Mr Jackrich Tein, while also commending Idama community for creating the right atmosphere for the project.

“The former President has indicated strongly that this is a great model for all other oil companies operating in the Niger Delta region to emulate and show their footprints in their host communities, to bring more succour to the people.

“The Niger Delta host community strry has always been that of neglect by oil operators
He (Jonathan) specially asked me to thanked Belemaoil for this project and we hope it will be the model that will be emulated by other operators.”

“I want to thank the President of the Federal Republic of Nigeria who has been so supportive to every ideas and every opportunities that I have sought for. I also appreciate our former President Goodluck Jonathan, who calls me his son.

“I appeal to the people in our region we must come together, rally round what we have in order to produce what we need. Nobody will celebrate you if you fail to recognised who you are.

“The battle has moved from carrying of guns to intellectual warfare. If other operators can emulate the Belemaoil model, the host communities and the oil industry will be at peace.”

For his part, the Group General Manager of NAPIMS, Mr Bala Wunti, represented by General Manager, Community Relations, Mrs Clementina Arubi, assured that they will continue to partner with Belemaoil, while also calling on other operators to emulate the Belemaoil model.

“We at NNPC is proud to commission another laudable and essential project which would provide succour to the people. This project is in furtherance of the government’s social investment initiative through its oil and gas sector.

“Our vision for social interventions is to operate in an ethical and sustainable manner and deal with the environment and social impact occasioned by our activities, hence the approval of various CSR projects by our operators across the country for maximal impact.”

For his part the President of Ijaw Youths Council, Peter Igbifa, prayed for Belema oil to prosper and take over from oil multinationals who have failed to be socially responsible to their host communities.

“Every Ijaw community is suffering from water. As the rivers get destroyed by oil pollution, so has our lands and underground source of water is polluted.

“IOCs should know that there is no room for excuses. The people of this region must not be tested of their patients. Belemeaoil has shown that been socially responsible is possible.”