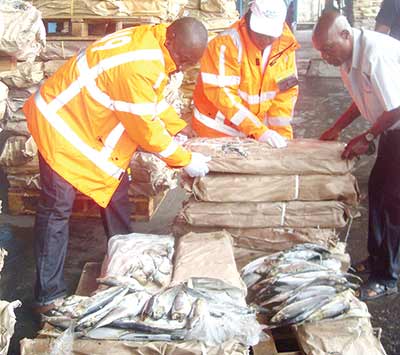 *Inspection of imported fish at a Lagos Cold room by officials of the Federal Department of Fisheries (FDF).

07 May 2018, Sweetcrude, Lagos — As the Federal Government intensifies efforts to move the nation out of its mono-economic status, experts have revealed that Nigeria can save over $800 million being spent on the importation of fishes annually if the nation’s deep ocean resources are optimally developed and exploited.

In a chat with the media in Lagos recently, the Director/Head, Fisheries Resources Department, Nigeria Institute for Oceanography and Marine Research, Lagos, Dr. (Mrs.) Parcy Ochuko Obatola said Nigeria is naturally endowed with a lot of marine resources but these resources have been left untapped over the decades thereby leading to a huge economic loss.

According to her, research has it that Nigeria consumes about 2million metric tons of fishes every year but can only produce less than 800,000 metric tons domestically thereby necessitating the importation of about 1.8 million metric tons with the cost implication of over $800 million even as she noted that over 70% of the fishes domestically supplied are produced by small-scale fishermen whose activities litter the coastline.

She said, “right now when we look at the demand and supply of fishes in Nigeria, there is still a huge deficit. The demand is almost 3million metric tons per annum, the supply is about two million metric tons and there is still a deficit of over one million including those imported and those produced within this country. We are producing about 800,000 metric tons in Nigeria. So we can see the reason we actually need to carry out activities when it comes to the blue economy.”

Mrs. Obatola who noted that most of the fisheries that are exploited in Nigeria are done at the inshore waters and have consequently put a lot of pressure on the resources and negatively impacted the ecosystem via indiscriminate pollution, water contamination and other forms of illegal, unregulated and unreported fishing otherwise known as IEUs, which have translated into a situation where there are lesser catches and smaller sizes of fishes, called on the government and other stakeholders to help ensure that the activities of the fishermen are regulated and managed while the deep ocean resources are tapped to help reduce pressure on the inshore waters.

The research expert further explained that various surveys conducted by the institute have shown that some rare species of fishes and other marine resources are in the Nigerian territorial waters especially at the deep oceans and practical recommendations on how they can be exploited for the economic benefits of the nation have been forwarded to the federal government, hence the purchase of the deep water vessel, even as she argued that Nigeria could be losing about N50 billion yearly to illegal fishing and other unregulated activities of intruders at the deep oceans.

“We have carried out surveys and found out that there are resources in the deeper waters that the fishing industry can exploit so that the inshore waters would have a respite if the pressure on them is reduced. We have other resources out there that can be exploited.

“As I am talking to you right now, Nigeria as a nation is not exploiting our Tuna resources but that doesn’t mean that people are not exploiting it. People come from other places to exploit them on our territorial waters.