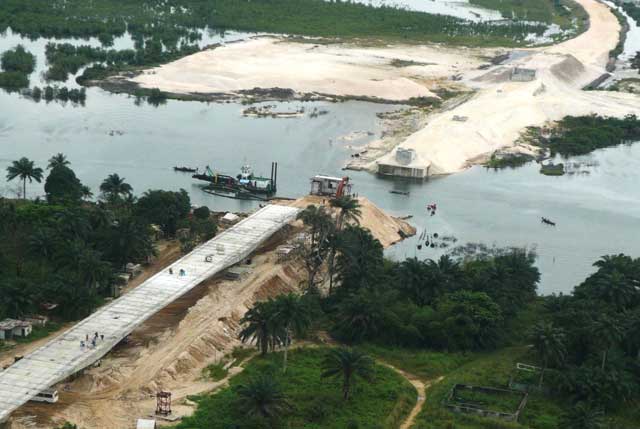 *Construction of Bodo-Bonny road with a bridge across the Opobo channel.

Wike also announced that NLNG has produced its 50 percent part of the N120 billion needed for the road construction and was waiting for the 50 percent counterpart fund from the Federal Government.

Speaking on Sunday during the Thanksgiving service for the member Representing Tai/Eleme/Oyigbo Federal Constituency in the House of Representatives, Mr. Barry Mpigi, the Governor said while the APC-led Federal Government institutes fluid projects in Rivers State, it funds projects in northern states.

Governor Wike explained that a united front was needed to challenge the current situation where the Federal Government deliberately denies the State her benefits, despite the state’s contributions to the wealth of the country.

He advised Rivers politicians, irrespective of political affiliation, to embrace a common platform to attract federal projects to the state.

“NLNG has deposited N60 billion for the Bodo-Bonny road, but the Federal Government has refused to pay its N60 billion counterpart funding for the execution of the project.

“But two days ago, the Federal Government awarded a project for Abuja-Kaduna-Kano at N154 billion. Look at the one NLNG said they are bringing N60 billion, it has become an issue of politics,” he said.

Governor Wike reiterated his demand for the commensurate release of funds for the Niger Delta to balance the $1billion to be withdrawn from the Excess Crude Account to fight Boko Haram.

He said Rivers politicians must work together to avert the suffering of the people, adding that all politicians should place Rivers development ahead of their political affiliation.

He said: “My coming here today tells you that in unity, we will have development. Let us put heads together to understand that anything that will bring development to Ogoni, all of us, should do it.

“It doesn’t matter the political party that you belong to, you cannot see something wrong happening to your people and keep quiet,” the Governor said.

For his part, the Member of the House of Representatives representing Tai/Eleme/Oyigbo Federal Constituency, Mr. Bari Mpigi, who is a member of APC advocated for politics centred on Rivers State.

Mpigi explained that development was party-blind, pointing out that the roads constructed by the governor are useful to both APC and PDP members.

He also announced that he was not under any obligation on who to relate with, adding that he is guided by the interest of his people.