Evergreen
Home featured Bonga: In a class of its own

Bonga: In a class of its own 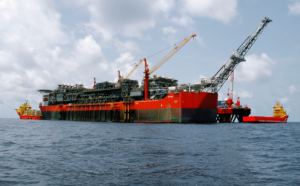 Lagos — The Group General Manager of the National Petroleum Investment Management Services (NAPIMS), Mr. Bala Wunti, visited Bonga, Nigeria’s first deep-water development, last month and came away with an endorsement that shines a light on the status of the field as a pioneer. He described Bonga as “best in class.” He was referring to decades of safe production of oil and gas in a location that is 120km offshore, in water depths of more than 1,000 metres across an area of 60 square kilometres. Mr. Wunti, who led his leadership team to Bonga ahead of the 7th turnaround maintenance planned for the asset, then declared: “One of the best companies on planet earth is called Shell.” This was in apparent reference to the achievements of Shell Nigeria Exploration and Production Company Limited (SNEPCo,) which pioneered deep-water oil and gas production in Nigeria with the coming on stream of Bonga in 2005, accounting for 10 percent of the country’s output at the time. In continuation with the success story, SNEPCo implemented the Bonga Northwest project in 2014, adding some 40,000 barrels per day potential to the total production from this field. Bonga Northwest won the global Platts Engineering Project of the Year award in 2015. Mr. Wunti is right. Bonga is a class act!

The Bonga story is set in a complex geological zone where treacherous conditions including freezing temperatures, water pressure and pitch darkness make oil and gas production a major technical and environmental challenge. One mistake could cost lives and money. In 1993, Shell, with impressive deep-water credentials, set up SNEPCo to pioneer deep-water oil production in the Gulf of Guinea. This would be long after Shell had taken the same game-changing step when it pioneered oil and gas production on land through the operations of what later became known as The Shell Petroleum Development Company of Nigeria Ltd (SPDC). The company exported the first shipment of oil from Nigeria in February 1958.

The efforts of SNEPCo paid off when first oil flowed from Bonga field. The field has the capacity to produce more than 200,000 barrels of oil a day and 150 million standard cubic feet of gas a day. Production is through the giant Floating, Production, Storage, Offloading (FPSO) vessel, which receives crude through undersea pipelines that is then offloaded to tankers while the gas is piped to LNG plant. The FPSO was upgraded to handle the additional oil from Bonga Northwest. This facility is not like anything you’ve seen. As an employee of Shell, I visited the FPSO in 2011, in a trip that opened my eyes to the complexity of deep-water oil and gas production. The 300-metre FPSO, one of the largest in the world, is the height of a 12-storey building while its deck spans roughly the size of three football fields. But this monster of a vessel sits lonely in the middle of nowhere, like a speck when seen from a distance, at the mercy of Mother Nature whom it must continue to watch if it wants to remain in business. As our helicopter made to land, sight gave way to imagination in my search for land. I was looking in the wrong direction. This was the Atlantic Ocean, the second largest in the world! Onboard, the vessel surprisingly felt like home, rocked gently by the clear and inviting blue waters. When I remarked about the calmness, I was quickly reminded that the rocking often gave way to tossing in line with the capricious mood of Mother Nature. Thankfully, I was spared the mood swing!

I left behind colleagues working for Nigeria, as SNEPCo, with the support of the Nigerian National Petroleum Company Limited (NNPC), and the co-venture partners –TotalEnergies, Nigerian Agip Oil Company, and ExxonMobil – safely and efficiently produce oil and gas from Bonga and related fields, launching Nigeria into the league of deep-water producers. Bonga has produced more than 950 million barrels of oil since 2005. Oil production has gone side by side with contributions to the Nigerian purse. Last year, SNEPCo remitted $562 million in corporate tax and payments to government, and another $23 million to the Niger Delta Development Commission (NDDC.) SNEPCo’s operations have inspired several significant discoveries of oil and gas over the last two decades, including the Bolia and Doro fields, in which it has 55 percent interest. Today, nearly one-third of Nigeria’s deep-water oil and gas production comes from Bonga and the non-operated Erha fields.

The operations at Bonga have resulted in the creation of a generation of deep-water professionals, suppliers and service providers, with SNEPCo awarding major engineering and construction contracts to indigenous companies. In one example, the manufacture and rebuild of hydraulic flying leads and refurbishment of old subsea trees are being carried out in-country by wholly indigenous companies. The efforts of SNEPCo to develop Nigerian content predate the enactment of the Nigerian Content Act in 2010. The efforts have seen Bonga evolve as a Nigerian venture delivered by Nigerians using expertise and best-practice provided by Shell. Some 96 pecent of the staff of SNEPCo are Nigerian, and since 2005, the Managing Director of the company has been Nigerian, with Mrs. Elohor Aiboni, currently the first female in the role.

Social investments, especially in education and health, are a key part of SNEPCo’s operations. It’s National University Scholarship, delivered in conjunction with NNPC, has supported over 490 Nigerian students since the programme was launched in 2016. Another postgraduate scholarship programme introduced in 2017 enables graduates from any Nigerian state to obtain a master’s degree in oil and gas-related disciplines from leading universities in the United Kingdom. Late last year, Nigeria’s Tertiary Education Trust Fund presented an award to SNEPCo for consistent contributions towards the growth of the public tertiary education sector. In 2019, the company launched the Vision First Initiative, taking medical eyecare to various parts of the country. The latest outreach in the programme held in Lagos two months ago with more than 2000 people benefitting.

Bonga’s class act ties in nicely with the turnaround maintenance being conducted this month. This is an opportunity for rebirth, a time to review facilities and processes with a view to revitalising them for continuous optimum use. The exercise will focus on the FPSO and refresh it for more years of service. The exercise will, among other things, help to further deepen deep water technology in Nigeria as several indigenous companies and personnel will play key roles. SNEPCo’s Managing Director Elohor Aiboni set out her vision in a meeting with contractors: “The Bonga turnaround maintenance is important to revitalise this critical national asset. But more important is carrying out the turnaround safely. That is what keeps me awake at night. It is our top priority as a company, and we promote this by encouraging our staff and contractors to speak up and work only if it is safe.”