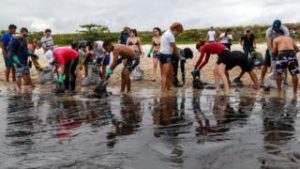 Rio De Janeiro — Brazil will seek damages related to an oil leak off the country’s coast, the country’s solicitor general said Friday, referring to the crude that has washed up along thousands of kilometers of beaches, mangroves and reefs in recent months.

Police on Friday said they were investigating a Greek-flagged ship allegedly responsible for the spill, which they say may has occurred about 700 km (420 miles) off the Brazilian coast between July 28-29, after the vessel made a stop in Venezuela.