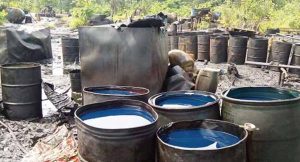 *Drums of refined diesel at an artisanal refinery.

Port Harcourt — The ongoing summit organized by the Federal Government on the integration of artisanal and modular refineries into the national economy, should be replicated in the Niger Delta region, for its target audience and stakeholders, an environmental rights group has said.
Recall that the National Summit on the Integration of Artisanal and Modular Refinery Operations in Nigeria, convened by the Senior Special Assistant to the President on Niger Delta Affairs, Sen. Ita Enang, which is being attended by the Vice President and other Ministers is ongoing in Abuja.
The Youths and Environmental Advocacy Centre, YEAC, said artisanal refiners who are targets of the summit, will not be able to attend the event for lack of resources and paranoia over their illegal activities.
Environmentalist and Executive Director of YEAC, Fyneface Dumnamene Fyneface, disclosed that plans have reached advanced stage, as the group was creating a database for artisanal refiners in the Niger Delta region.
He commended the federal government for organizing the summit, describing it as well-conceived, although coming late, as it would address the issues associated with oil theft and artisanal refining activities in the Niger Delta through modular refineries.
YEAC also demanded for the establishment of Presidential Artisanal Crude Oil Refining Development Initiative, PACORDI, similar to the Presidential Gold Mining Development Initiative, PAGMI in the North, which earlier integrated illegal gold mining into the national economy.
“YEAC urges the Federal Government to consider stepping-down the summit in the Niger Delta, where it targets to address the issues as majority of the artisanal refiners that the summit would benefit are not only afraid to travel to Abuja for fear of arrest over their illegal acts but also lack the resources to fund themselves to attend the summit in Abuja.
“Youths and Environmental Advocacy Centre is at advanced stages of registering and creation of database of artisanal refiners in the Niger Delta through a contract signed with MTN, 9Mobile, Airtel and Glo through a Lagos-based company that enables artisanal refiners register on the secured online database through a text message from their phones to 33811.
“We started creating the database and registering artisanal refiners for the formation of cooperative societies for modular refineries in 2019, following the successful launch of the platform on December 10 that year and circulation of free registration form across communities in the Niger Delta.
“The registration is progressing smoothly and received a boost on January 10, 2020 when President Muhammadu Buhari, through the Minister of State for Environment, Mrs. Sharon Ikeazor, in Port Harcourt called for the registration of artisanal refiners and formation of cooperative societies for modular refineries.
“We currently have jingles to this effect running on radio and our partners from the United Kingdom will soon arrive for an investment workshop for both the artisanal refiners and those who want to invest in the Modular Refineries.”
While commending the objectives of the summit as comprehensive enough for a start, YEAC said if the outcome was properly managed with more stakeholders’ involvement, during the requested step-down town hall meetings in the Niger Delta, and given legal in the PIB, it would achieved its lofty goals in the oil and gas sector.
The group further said that the summit will also address issues around insecurity in the Niger Delta, as there will be a drastic reduction in the number of artisanal refiners vis-a-vis proliferation of small arms and light weapons in the hands of the non-state actors who engaged in artisanal refining.