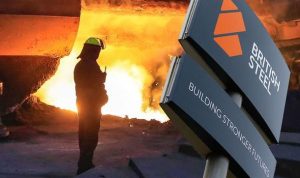 London — British Steel, the country’s second largest steel producer, is on the brink of collapse unless the government agrees to provide an emergency 30 million pound ($38 million) loan, two sources close to the situation said.

British Steel said negotiations had not concluded and it continues to work with all parties to secure the future of the business. It also reassured employees that their salaries will be paid in full for May.

Owned by investment firm Greybull Capital, British Steel employs around 5,000 people, mostly in Scunthorpe, in the north of England, while 20,000 more depend on its supply chain.

Greybull, which specialises in trying to turn around distressed businesses, paid former owners Tata Steel a nominal one pound in 2016 for the loss-making company which they renamed British Steel.

British Steel had asked the government for a 75 million pound loan but has since reduced its demand to 30 million pounds after Greybull agreed to put up more money, according one of the sources, who is close to the negotiations.

Greybull was also the owner of Monarch, an airline that went bust in October 2017.

If the British Steel loan is not approved by Tuesday afternoon, administrators EY could be appointed as early as Wednesday, the source said.

Andrew Stephenson, a junior business minister, told parliament the government was in discussions with the company and will “leave no stone unturned in its support for the industry”.

He added the government has been in contact with former British Steel owner Tata Steel.

The second source said British Steel lost the backing of one of its four big lenders earlier on Tuesday, while some of the others had already exited.

“The (company’s) cash was not big enough to sustain even one bank pulling the plug,” he said.

The possible collapse of British Steel comes after Germany’s Thyssenkrupp and India’s Tata Steel ditched a plan this month to merge their European steel assets to create the EU’s second largest steelmaker after ArcelorMittal.

Stephenson said he held talks with Tata Steel this week about issues relating to Port Talbot, and that the India-based steelmaker had painted a positive picture of the site.

EU steel company shares are currently trading at their lowest in nearly three years, driven down by poor demand, especially in autos, and cheap imports that can no longer reach the United States due to trade tariffs.

Making steel profitably is particularly difficult in Britain, where steelmakers pay some of the highest green taxes and energy costs in the world and are saddled with high labour costs and business rates. They also face uncertainties surrounding Britain’s planned exit from the European Union.

After making a profit in 2017, British Steel cut around 400 jobs last year, blaming factors such as the weak pound.

Earlier this month, it appeared to have secured the backing of lenders and shareholders to continue operating after the uncertainty around Brexit hammered its order book.

“The whole manufacturing sector is crying out for certainty over Brexit, unable to plan the trading relationship it will have with its biggest market. We can only state again the need to avoid a no-deal scenario at all costs,” said industry group UK Steel.

British Steel secured a government loan of around 120 million pounds ($154 million) this month to enable it to comply with the European Union’s Emissions Trading System (ETS) rules.

In the event of a hard Brexit, Britain would leave the ETS so the government has not issued any free permits for 2019 to help companies comply with the scheme. British Steel had banked on using 2019 permits to cover its scheme commitments for 2018.

“The collapse of British Steel would be devastating for thousands of jobs in Scunthorpe, as well as in the wider supply chain,” opposition Labour Party leader Jeremy Corbyn said on Twitter. “The government must act to secure the long term future of the steelworks — protecting people’s livelihoods and the community.”

The second source said the British government was reluctant to hand over more cash, because Greybull could end up with the funds if the business fails.

“Greybull could walk out with millions because they secured all their loans against the assets. At the holding level, Greybull are the only creditor. The government wants Greybull out before putting money into the business,” he said.

“Its going to be difficult to survive this afternoon.”

The UK government has a chequered history with Greybull, after the collapse of airline Monarch in 2017 forced it to repatriate more than 100,000 stranded tourists at a cost of about 60 million pounds.

The Mayfair-based firm also provided backing for the buyout of British high street electronics chain Comet before its collapse in 2012.

Unions demanded the government give British Steel the loan.

“They must now put their money where their mouth is,” said Ross Murdoch, national officer for the GMB union for steelworkers.

Earlier this month, British Steel won approval from a French court to buy the Ascoval steel mill in northern France, pledging to invest 47.5 million euros and guarantee the jobs of the 270 workers employed at the site.