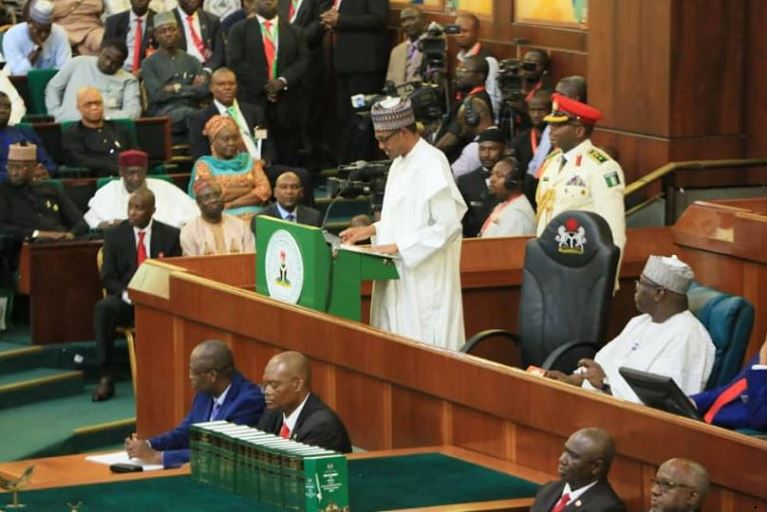 Lagos — The underperformance of the 2019 N8.9 trillion has been largely blamed on the low revenue from crude oil, according to President Buhari while presenting the 2020 N10.33 trillion to the National Assemble on Tuesday in Abuja.

He explained that as at June 2019, the federal government’s actual aggregate revenue (excluding Government-Owned Enterprises) was N2.04 trillion. This revenue performance he said, is only 58 percent of the 2019 Budget’s target due to the underperformance of both oil and non-oil revenue sources.

Specifically, he said, oil revenues were below target by 49 percent as at June 2019.

President Buhari explained that the above reason reflects the lower-than-projected oil production, deductions for cost under-recovery on supply of premium motor spirit, PMS, as well as higher expenditures on pipeline security/maintenance and Frontier exploration.

The 2019 ‘Budget of Continuity’ was based on a benchmark oil price of US$60 per barrel, oil production of 2.3 mbpd, and an exchange rate of N305 to the United States Dollar.

Based on these parameters, a deficit of N1.918 trillion or 1.37 percent of Gross Domestic Product was projected.

However, President Buhari said the target could not be met as daily oil production averaged 1.86 mbpd as at June 2019 as against the estimated 2.3 mbpd that was assumed.

This shortfall was partly offset as the market price of Bonny Light crude oil averaged US$67.20 per barrel which was higher than the benchmark price of US$60.

Additionally, he said revenue projections from restructuring of Joint Venture , JV oil and gas assets and enactment of new fiscal terms for Production Sharing Contracts , PSCs did not materialise, as the enabling legislation for these reforms is yet to be passed into law.

Under the 2020, parameters oil price benchmark of US$57 per barrel, daily oil production estimate of 2.18 mbpd and an exchange rate of N305 per US Dollar for 2020 were adopted.

The federal government now expects enhanced real GDP growth of 2.93% in 2020, driven largely by non-oil output, as economic diversification accelerates, and the enabling business environment improves. However, inflation is expected to remain slightly above single digits in 2020.

The sum of N80.88 billion was set aside for the Niger Delta Development Commission, NDDC which is now supervised by the Ministry of Niger Delta Affairs.

The Power sector got the second largest budget of N127 billion.

In 2020, Buhari said the national grid will be modernised in 3 phases; starting from 5 Gigawatts to 7 Gigawatts, then to 11 Gigawatts by 2023, and finally 25 Gigawatts afterwards in collaboration with the German Government and Siemens.

According to the International Monetary Funds, IMF, Sub-Saharan Africa is projected to continue to grow from 3.1 percent in 2018 to 3.6 percent in 2020, driven by investor confidence, oil production recovery in key exporting countries, sustained strong agricultural production as well as public investment in non-dependent economies.

He explained that the country now has sustained accretion to its external reserves, which have risen fromUS$23 billion in October 2016 to about US$42.5 billion by August 2019. The increase he said, is largely due to favourable prices of crude oil in the international market, minimal disruption of crude oil production given the stable security situation in the Niger Delta region.