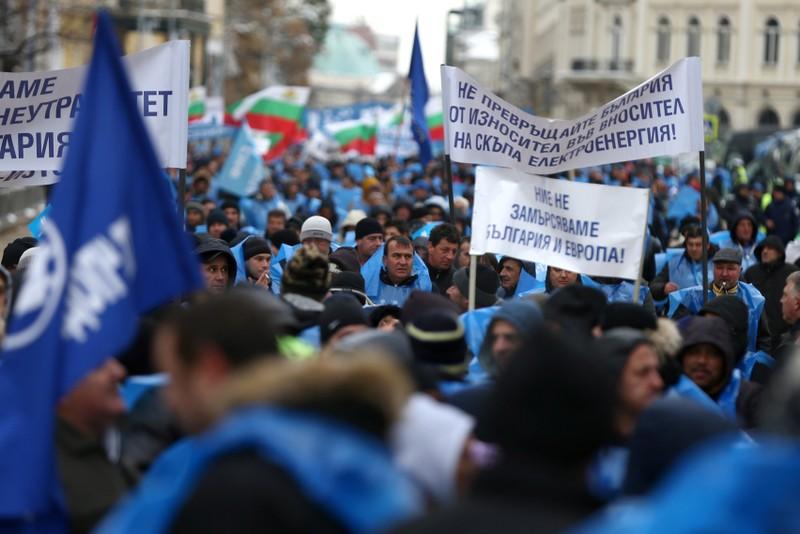 Workers at state coal mines and the largest coal-fired plant in Bulgaria take part in a demonstration in Sofia, Bulgaria, November 29, 2018. The banner reads: “We do not pollute Bulgaria and Europe!”. REUTERS/Stoyan Nenov

30 November 2018, News Wires — Miners and workers at Bulgaria’s largest coal-fired power plant Maritsa East 2 marched in Sofia on Thursday to protect their jobs and to urge the government to support coal-fired energy production in the Balkan country.

More than 1,000 people urged the government to guarantee it would not shut mines and power plants at Maritsa East lignite coal complex in southern Bulgaria, despite a European Union push to decarbonise the bloc’s economy by 2050.

“It looks like they may start closing units one by one, because of the convention that forces us to cut the harmful emissions,” said Katia Vassileva, 45, a worker at Maritsa East 2, adding that Bulgaria was having to pay a heavy price to buy the carbon permits to make up for emissions from the plant.

A spike in the price of European carbon permits has widened financial losses of the state-owned 1,620 megawatt Maritsa East 2, increasing workers’ fears of eventual closure.

They say any move to shut the plant could cause power shortages or a spike in power prices. Coal-fired plants produce more than 40 percent of Bulgaria’s electricity. The government has said it would work to ensure they continued to operate.

Bulgaria’s two major trade unions say the European Commission has set a pace for creating a greener economy that was too fast and too costly for the Balkan country.

“We need to find a solution, because it is not fair for the poorer countries,” said Vladimir Topalov, head of the miners federation at Podkrepa trade unions.

Some 20,000 people work in Maritsa East complex, whose lignite coal deposits are rich in sulfur that is blamed for damaging air quality and causing respiratory diseases when released into the atmosphere.

Trade unions say the mine complex provides livelihoods for more than 100,000 people in the European Union’s poorest member.

The government has appealed against a European Commission decision to impose stricter limits on pollutants from coal-fired plants. Maritsa East 2 was the first coal-fired plant to be given an exemption from new EU pollution limits.

Bulgaria has said it would not back more ambitious goals to cut greenhouse gases at the United Nations climate conference that opens on Sunday in Poland.

“Bulgaria cannot allow itself to lose competitiveness in the energy sector and will work to defend the social right of the people working in it,” President Rumen Radev, who will present Bulgaria’s position at Katowice, wrote in his Facebook account.

The environmental campaign group Europe Beyond Coal has said Bulgarian Energy Holding with its Maritsa East 2 plant is one of Europe’s biggest air polluters.