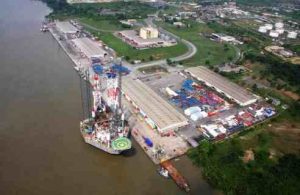 Port Harcourt — Contrary to claims that the Calabar seaport was being under-utilized as a result of shallow draught and dredging issues, the port is deep enough and had berthed flat bottom vessels as big as 200meter length over all, LOA.

The terminal operator of Calabar port, Eco Marine Terminal Limited,  disclosed that the port has remained fully operational over the decades, but was only beset by inadequate publicity.

Akorede expressed optimism that the visit of the State Government will aid in publicizing activities of the port even farther than his  expectations.

He also expressed delight at the timely visit, noting that concessionaires at the port had long envisaged the State Government coming to know the operations of the Calabar port.

“The Calabar Port has remained fully operational over the decades, but is only beset by inadequate publicity. It is our hope that the visit of a representative of the State Government will aid in publicizing activities of the Port even farther than our expectations.

“Calabar Port is deep enough and had berthed flat bottom vessels as big as 200mtr LOA (length over all).

“We are calling on the business public to take advantage of the enormous opportunities the Port offers, especially its proximity to the Northern, South-eastern parts of the country.”

He assured that his company will continue to collaborate with the State Government and the Nigeria Ports Authority, to ensure that the Calabar seaport remains operational.

Archibong, who decried the negative perception and the under-utilization of commercial opportunities of the Calabar port, lamented that revenue that ought to have been accruing to the State was lost.

She disclosed that it was in anticipation of the industrial revolution of Cross River State that Governor Ayade embarked on the Deep Seaport Project in Bakassi, with a 20metres draught to receive grandmother vessels, which would take maritime business to utmost heights.

The Commissioner said that the Bakassi deep seaport would complement the already existing Calabar port which would be actively receiving smaller vessels with its 4-5 metres draught.