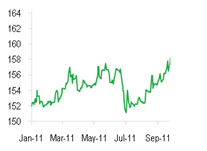 3 November 2011, Sweetcrude, Lagos – The Central Bank of Nigeria has reacted to the pressure on the Naira, following comments by Governor Sanusi Lamido Sanusi suggesting that the CBN may move the mid-point of its targeted USD-NGN band to 155-156 and keep it there over the course of 2012, as long as Nigeria does not run out of reserves “at an outrageous rate”.

His comments gives credence to news reports last week that Nigeria may be mulling 155 as the new mid-point to its USD-NGN currency band (from 150 currently. It was gathered that clarification on official adoption of the new mid-point is expected in the “next few days”. If adopted, it would see the acceptable trading range of the Nigerian naira (NGN) shift to 150.35-159.65 at the official bi-weekly WDAS auctions, from a perceived 145.50-154.50 now.

In recent weeks strong demand for foreign exchange (FX) in Nigeria had resulted in USD-NGN trading outside its preferred band at WDAS auctions, prompting significant tightening by the authorities (see On the Ground, 11 October 2011, ‘Nigeria –Policy choices in a time of uncertainty’), and a revision to the rules on what category of FX demand would be admissible at official WDAS auctions. Foreign companies bringing capital into Nigeria and selling FX on the ‘autonomous’ interbank market will, in future, have to use the interbank market for the purposes of dividend remittances. Likewise for portfolio investors bringing new inflows into the country (although exiting investors, who had brought funds into Nigeria prior to the new regulations, may still access the WDAS auction on exit). Documentary requirements for oil importers accessing official WDAS FX auctions have been tightened considerably. The net impact of these moves, which effectively limits access to officially provided FX to certain classes of importers only, is to push much more demand for FX on to the interbank market. Although the NGN strengthened at the official WDAS, back to 150, spreads with the interbank market (which has been trading around 159-60) widened, prompting CBN selling to the interbank market as well.

Rather than signal a meaningful devaluation of the NGN, the newly announced official mid-point of the NGN trading band will merely close the spread that had emerged between the official and interbank USD-NGN markets, while preserving Nigeria’s FX reserves. Confidence in the CBN’s ability to commit to the new mid-point will be key to FX market outcomes in the future. In our view, allowing the official FX rate to react to market conditions is a positive, suggesting that the exchange rate, rather than external reserves, will adjust to heightened demand for FX. But having announced a devaluation once, curbing expectations of further currency weakness – especially if oil prices should come under pressure – may prove more difficult.