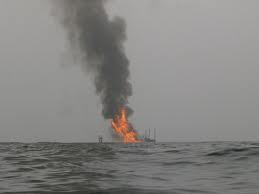 The fire, which broke out on Jan. 16, killed two workers and caused substantial damage to the jackup KS Endeavour and liftboat Mako. One hundred and fifty two of the 154 workers were on board the rig and liftboat when the fire started were evacuated.

Chevron subsidiary Chevron Nigeria Ltd. will drill two relief wells to control the Funiwa Deep 1A well. Transocean and Noble Drilling Corp. will provide the rigs, which are on loan from ExxonMobil, Eni and the Nigerian National Petroleum Corp.

Drilling is expected to begin in the next seven to 10 days.

The KS Endeavour was under contract to CNL and operated by FODE Drilling Nigeria Ltd. at the time of the incident. The jackup had been drilling a natural gas well approximately 6 miles offshore Nigeria in approximately 40 feet of water.

The cause of the fire remains under investigation. Chevron said it was trying to seal the well to extinguish the fire.
Written by Karen Boman, Rigzone staff.