SAN RAMON, Calif., July 11, 2011 – Chevron Corporation (NYSE: CVX) today reported in its interim update that earnings for the second quarter 2011 are expected to be higher than in the first quarter 2011. Upstream results are projected to improve between sequential quarters, benefiting from higher crude oil prices. Downstream earnings in the second quarter are also expected to be higher, reflecting improved industry margins.

Basis for Comparison in Interim Update
The interim update contains certain industry and company operating data for the second quarter 2011.

The production volumes, realizations, margins and certain other items in the report are based on a portion of the quarter and are not necessarily indicative of Chevron’s full quarterly results to be reported on July 29, 2011. The reader should not place undue reliance on this data.

Unless noted otherwise, all commentary is based on two months of the second quarter 2011 versus
full first quarter 2011 results.

UPSTREAM
The table that follows includes information on production and price indicators for crude oil and natural gas for specific markets.
Actual realizations may vary from indicative pricing due to quality and location differentials and the effect of pricing lags.
International earnings are driven by actual liftings, which may differ from production due to the timing of cargoes and other factors. 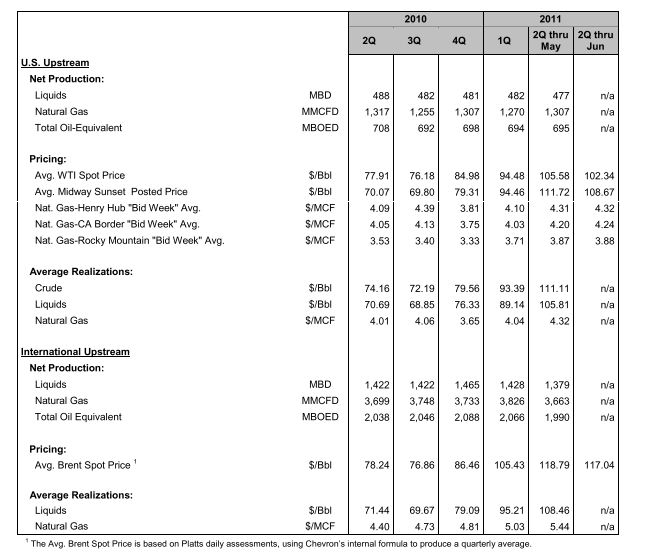 U.S. crude-oil realizations for the first two months of the second quarter increased about $18 per barrel to $111.11, and International liquids realizations improved approximately $13 to $108.46 per barrel. 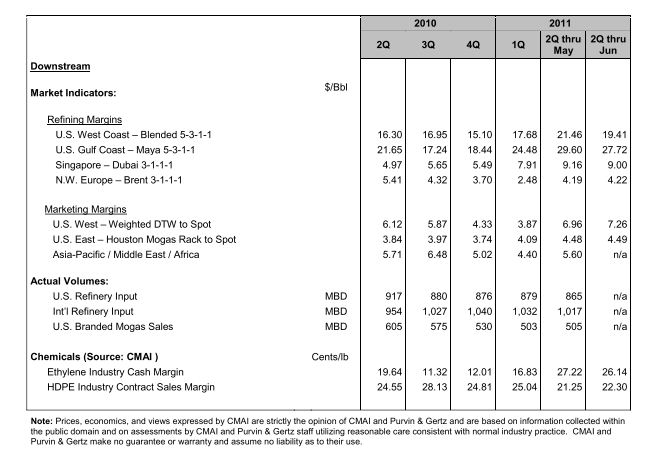 DOWNSTREAM
The table that follows includes industry benchmark indicators for refining, marketing and chemical margins. Actual margins realized by the company will differ due to crude and product mix effects, planned and unplanned shutdown activity and other company-specific and operational factors.

ALL OTHER
The company’s general guidance for the quarterly net after-tax charges related to corporate and other activities is between $250 million and $350 million. Due to foreign currency effects and the potential for irregularly occurring accruals related to income taxes and other matters, actual results may significantly differ from the guidance range.

NOTICE
Chevron’s discussion of second quarter 2011 earnings with security analysts will take place on Friday, July 29, 2011, at 8:00 a.m. PDT. A webcast of the meeting will be available in a listen-only mode to individual investors, media, and other interested parties on Chevron’s website at www.chevron.com under the “Investors” section.

Additional financial and operating information will be contained in the Earnings Supplement that will be available under “Events & Presentations” in the “Investors” section on the website.