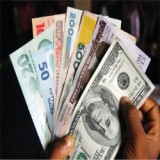 The boost in supply caused the interbank foreign exchange market to drop by 10 kobo to N157.4 from N157.5 per dollar on Tuesday.

The official exchange rate also dropped by 10 kobo to N155.8 from N155.9 per dollar at the bi-weekly foreign exchange auction conducted by the Central Bank of Nigeria (CBN), Wednesday.