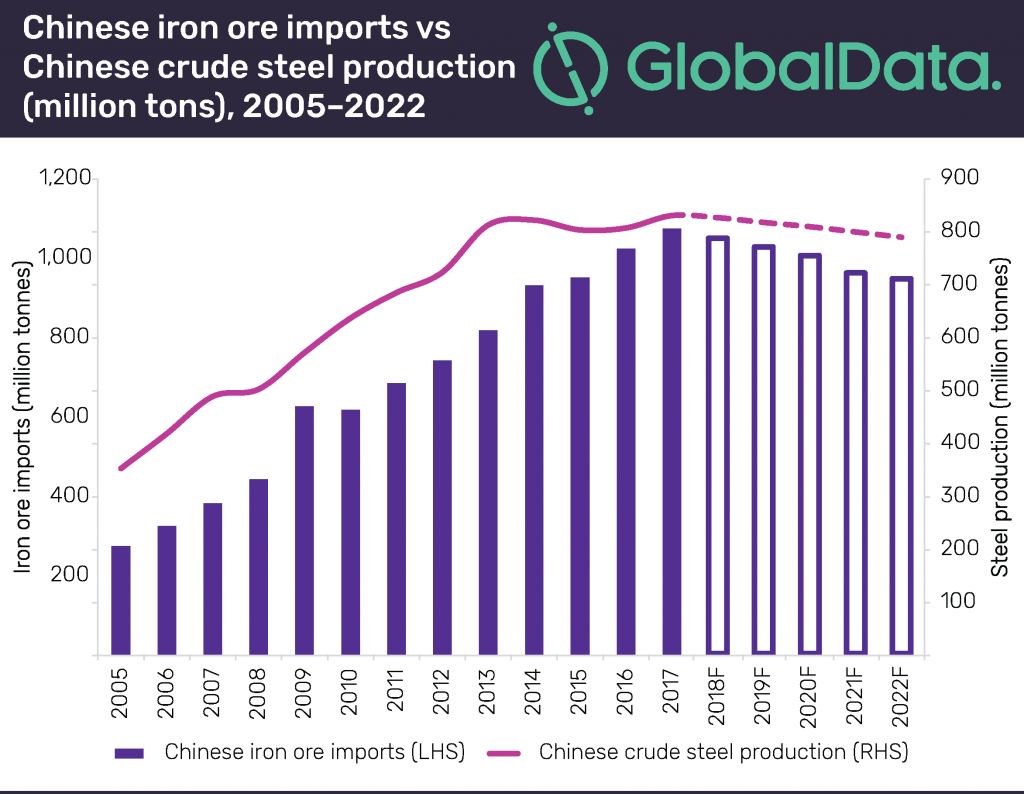 07 October 2018, Sweetcrude, Lagos — China’s growing demand for higher grade iron ore in its bid to curb environmental damage is set to drive down the crude steel production and iron ore imports between 2018 and 2022, says leading data and analytics company GlobalData.

The company forecasts that due to Chinese steel capacity eliminations and a new era of environmental restrictions, crude steel production and iron ore imports are expected to decline by a Compound Annual Growth Rate (CAGR) of 1.14% and 2.52%, respectively between 2018 and 2022.

The Chinese steel boom, which started in the early 2000’s, has largely shaped the global iron ore market. With the vast majority of domestic mines producing low-grade iron ore with an average Fe grade of 30% and below, Chinese steelmakers have depended on imports of high-grade iron ore (Fe 58-62%) from Australia and Brazil.

However, the trouble for the iron ore import boom started brewing in 2016. Under the 13th five-year plan (2016-2021), the Chinese government set a target to eliminate 150 million tons of low quality and heavy polluting steel capacities.

Sameer Chakravarthy, a Mining Analyst at GlobalData, says: “Government policy to eliminate the inefficient steel capacities and the shift in the steel makers focus towards high-grade iron ore is impacting the major low-grade iron ore exporters.”

To overcome the situation, the company is focusing on producing higher grade iron (FE 60) ore, with a new 30 million tonnes per annum (mtpa) mine, Eliwana, in Western Australia’s Pilbara region and is expected to start commercial-scale production by July 2019.

Another Australian low-grade iron ore miner, Cleveland-Cliffs, has closed 11 million tons of iron ore production, whilst, in June 2018, BHP announced a US$2.9bn investment in its South Flank iron ore project to improve the average grade of iron ore from FE 61 to 62.

In addition, the government’s new ‘Blue Sky’ environmental initiative (2018-2020) has been introduced to reduce the air pollution. The three-year initiative focuses on winter production cuts across major steel producing regions, including the Beijing-Tianjin-Hebei region and neighboring areas which accounted for 27% of the country’s crude steel output in 2017.

Taking a step further, one of the biggest steel-producing cities of Tangshan in the Hebei province has ordered an extension of winter production cuts to extend through to the summer.

Chakravarthy concludes: “Even though the current reductions may not affect the country’s crude steel output significantly in 2018, they show clear intent by the government to keep more capacity idle in order to achieve the target of reducing pollution.”