– Energy costs were a major obstacle to business even before the recent energy price spike
– 43% of European firms are investing in climate measures, and at a faster pace than U>S. firms
– 58% of EU firms affected by the physical risks of climate change
– The transition to a low-carbon economy is perceived as a business risk by a large share of firms in Central and Eastern Europe, and as an opportunity for Southern European businesses. 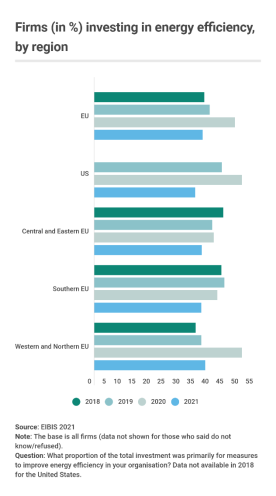 Lagos — Firms in the European Union are facing many hurdles that may shift their focus in investing in the green transition. The pandemic is high on this list, followed by the new shock linked to the war in Ukraine.

58% of EU firms confirm that their business is affected by the physical risks of climate change, and one-fifth think that extreme weather events have had a major impact on their business compared with around one-tenth in the United States.

The concerns are particularly high in Southern Europe, as firms find themselves more vulnerable to the impact of climate change. In particular, 78% of Spanish and 71% of Portuguese firms are worried, while 40% of Western and Central European businesses perceive high physical risks due to climate change.

firms-in-investing-in-energy-efficiency-by-region
Furthermore, the transition to a low-carbon economy is perceived to be business risk by a large share of firms in Central and Eastern Europe, as well as in Germany (43%), Latvia and Poland (47%). On the contrary, most Southern European businesses consider the green transition to be an opportunity, while Western and Northern European firms hold relatively diverse views.

About 40% of EU firms perceive rising energy costs to be the main obstacle to their business that is influencing their investment focus. At the same time, firms that invest in climate measures and energy efficiency — such as in Northern and Western European countries — are less likely to consider energy costs to be a barrier to investment.

In parallel, the pandemic is creating new challenges for energy efficiency investments, which slowed in 2021 across the European Union and United States. Lithuania and Ireland had the lowest share of firms’ investments in the sector.

Internationally, around 43% of European firms are investing in climate measures, and at a faster pace than the United States. Northern and Western Europe are leading the pack, with substantial contributions from Finland, Denmark and the Netherlands.

“The results of the EIB Investment Survey show that for EU businesses, energy costs are a major obstacle to investment plans. Nevertheless, higher energy prices are pushing firms to modernise their operations, by using capital to pay for newer machines, equipment and building renovation, with positive effects for energy efficiency and the energy transition. Our analysis shows that improved access to finance and awareness of the new opportunities and risks, together with better management practices, would help firms and especially small businesses to transition to a greener economy, without affecting their competitiveness,” said EIB Chief Economist Debora Revoltella. “Policymakers and public and private financial institutions need to work together closely to create an enabling framework that will unlock investments in climate action and make energy efficiency and renewable energy a priority. “

EIB Vice-President Ricardo Mourinho Félix added: “Accelerating financial support and advisory services for the deployment of renewable energy systems, energy efficiency and innovative green technologies is the key to addressing the ongoing energy crisis. The EIB is working closely with the European Commission and Member States — including through REPowerEU — to create a more independent EU energy system.”

What drives firms’ investment in climate action: Evidence from the 2021-2022 EIB Investment Survey

Economics Department of the EIB
The EIB Economics Department provides economic research and studies, as well as unique analyses of investment activities in the European Union and beyond. It supports the Bank in its operations and in the definition of its positioning, strategy and policy. Chief Economist Debora Revoltella heads the department, a team of 40 economists.

EIB Group Survey on Investment and Investment Finance
The EIB Group Survey on Investment and Investment Finance is a unique, annual survey of 13 500 firms. It comprises firms in all EU Member States and the United Kingdom, as well as a sample of US firms that serves as a benchmark. It collects data on firm characteristics and performance, past investment activities and future plans, sources of finance, financing issues and other challenges that businesses face. Using a stratified sampling methodology, EIBIS represents firms across all EU members and the United States, as well as across firm size classes (micro to large) and four main sectors. It is designed to build a panel of observations to support time series analysis, observations that can also be linked to firm balance sheet and profit and loss data. EIBIS has been developed and is managed by the Economics Department of the European Investment Bank (EIB), with support for development and implementation provided by Ipsos MORI.