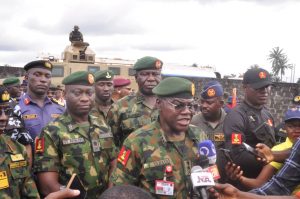 Flagging off the three exercises simultaneously at the Six Division Step-up Headquarters in Ahoada, Rivers State, the Chief of Army Staff, Lieutenant Gen. Farouk Yahaya, said the exercises were specifically designed to meet the unique security challenges across different states of the country.

Describing the level of oil theft in the Niger Delta as worrisome, the Army boss said all structures associated with oil theft must be pulled down and those involved appropriately punished and warned that any Army personnel found conniving with saboteurs will face the full wrath of the military jurisprudence.

“Each exercise will address issues peculiar and unique to the areas of their responsibility. Exercise Still Waters here will among other things, address the issue of oil theft which has become an enigma here.

“I will be waiting seriously to hear what we have achieved in that regards. Other areas also have unique challenges like banditry, cultism and kidnapping.

“The ones here are better placed to know the creeks where oil theft takes place and deal with them, and by the end of these exercises we hope to have set conditions to a more peaceful atmosphere for the conduct of peaceful elections.

“All security agencies are involved so that there is no threat that we cannot defeat.”

Earlier, the Chief of Army Operations, Maj. Gen. Tunde Akinjobi, giving a breakdown of the exercises, said the exercise will require both kinetic and non-kinetic approach, and called for the cooperation of members of the public.

“Exercise Enduring Peace will be conducted in headquarters and command in Kogi, Benue, Nasarawa and the Federal Capital Territory.

“All participating formations have been involved in series of participatory activities which culminated in the tactical exercise with our troops.

“Troop commanders are encouraged to put into practice all observations learned during the tactical exercise with our troops, while leveraging intelligence in their respective areas of responsibility to ensure a successful conduct.

Also speaking, the GGeneral Officer Commanding, Six Division Port Harcourt, Maj. Gen. Olufemi Oluyede, said the exercises were in line with the COAS vision to have a professional Nigerian Army ready to accomplish assigned missions within the joint environment in the defence of the nation.