Port Harcourt — A civil society organization known as Connected Development, CODE, has tasked the Rivers State government to address some of the infrastructural decay and deficit impeding development in the oil-rich rural communities in the state. 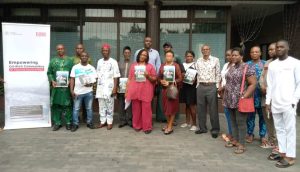 *Participants at the townhall meeting hosted by CODE

CODE lamented that as one of the States in the Niger Delta, a major region for Nigeria’s oil and gas industry, Rivers State has suffered prolonged conflict resulting from the negative impacts of oil exploration and tension between host communities and oil-producing companies.

Speaking at a townhall meeting in Port Harcourt, the Rivers State Lead, Connected Development, Ms. Evelyn Williams,
said after an appraisal to ascertain the state of social infrastructure in the region, the state of primary healthcare centres in the state are appalling conditions

Williams explained that the condition infrastructures in rural areas, especially health centres and public schools, was capable of undermining and sabotaging the well-being of rural dwellers and consequently, the local economy.

“In 2021, with support from Ford Foundation, CODE initiated the second phase of the project Empowering Oil-Rich Communities for Improved Service Delivery in Rivers State aimed to amplify the demands of oil-rich communities through reinforcing our evidence-based advocacy strategy.

“Majority of the Primary Healthcare Centers lack potable water, an overwhelming majority (83%) of them are disconnected or unconnected from the power supply, and a significant proportion of the PHCs across the local government areas lack proper waste disposal points.

“The fact that large populations of the grassroots depend on these facilities (without adequate environmental assets) highlights the urgent need for intervention.

“Also, schools are unable to meet the requirements and standards of education in the twenty-first century which breaches the human rights of the citizens of Rivers state by purposefully orunintentionally preventing them from receiving basic education.”

CODE further revealed that Ministries, Departments and Agencies were underfunded, which restricts their capacity to execute and complete initiatives that benefit rural areas.

“The citizens should benefit from strategic infrastructure investments to compensate for the overt and covert effects of oil exploration since they suffer the brunt of oil extraction, loss of varietyand other natural productive assets.

“CODE is calling on the Rivers State government to address personnel and infrastructural gaps in the hope of positively impacting health outcomes and the education profile of the state.

“We also advocate for a comprehensive audit of social infrastructures in Rivers State, beyond the oil-producing communities to support the transparent and efficient deployment of public resources and consequently improve health and education outcomes.”

The Community Development Chairman of Umuechem Community in Etche LGA, Engr Godson Nwairoegbu, decried that his community has no motorable road functional hospital despite hosting oil and gas wells.

“Umuechem is the second place where oil was discovered in commercial quantity after Oloibiri. We need the state federal and local goverment to help us, we have no roads, electricity, health centres etc”

“Yes there are pockets of government projects, but there are mainly in Bonny town. Bonny LGA has many communities and villages. And these communities lack basic amenities, including potable water. So we are calling on NDDC particularly to come to our aide, because Bonny contributes billions of Naira to the federal governemnt on a daily basis.”

Also the Community Development Chairman of Ali-Ohuru community in Ogba/Egbema/Ndoni Local Government Area, Barr. Mela Ake, said oil spills over the years has contaminated the underground water in the area.

“We have health centre but with inadequate facility. The structure of health centre itself needs complete rehabilitation. Our internal roads are in disrepair.”