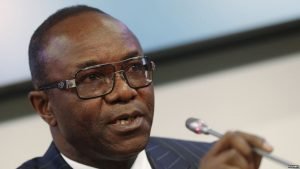 13 July 2018, Sweetcrude, Abuja — Minister of State for Petroleum Resources, Dr. Ibe Kachikwu, has called for increased and sustained collaboration among oil producing countries, stating that this would guarantee maximum benefits for them.

Kachikwu, in his presentation at an oil and gas forum, noted that globalisation has fostered cooperation across borders and will continue to erase barriers hindering trade.

He noted that it was important that member countries of the Organisation of the Petroleum Exporting Countries, OPEC, strategically maximise the benefits of its energy resources towards the advancement of the world.

Kachikwu argued that the future of oil would be determined by population changes, economic growth, policy changes, technology advancements and price uncertainties.

He noted that in the near future, policies were expected to be targeted towards increased energy efficiency, eradicating energy poverty and increased renewable energy sources in portfolios.

Technology innovations, he said, would affect the level of exploitation of tight and offshore plays, such as hydraulic fracturing of shale formations, while electric vehicles are projected to be adopted by more of the global population.

According to him, gas is expected to contribute most to the future energy demand, while renewables are anticipated to be the fastest growing energy source, with an annual growth rate of 6.8%.