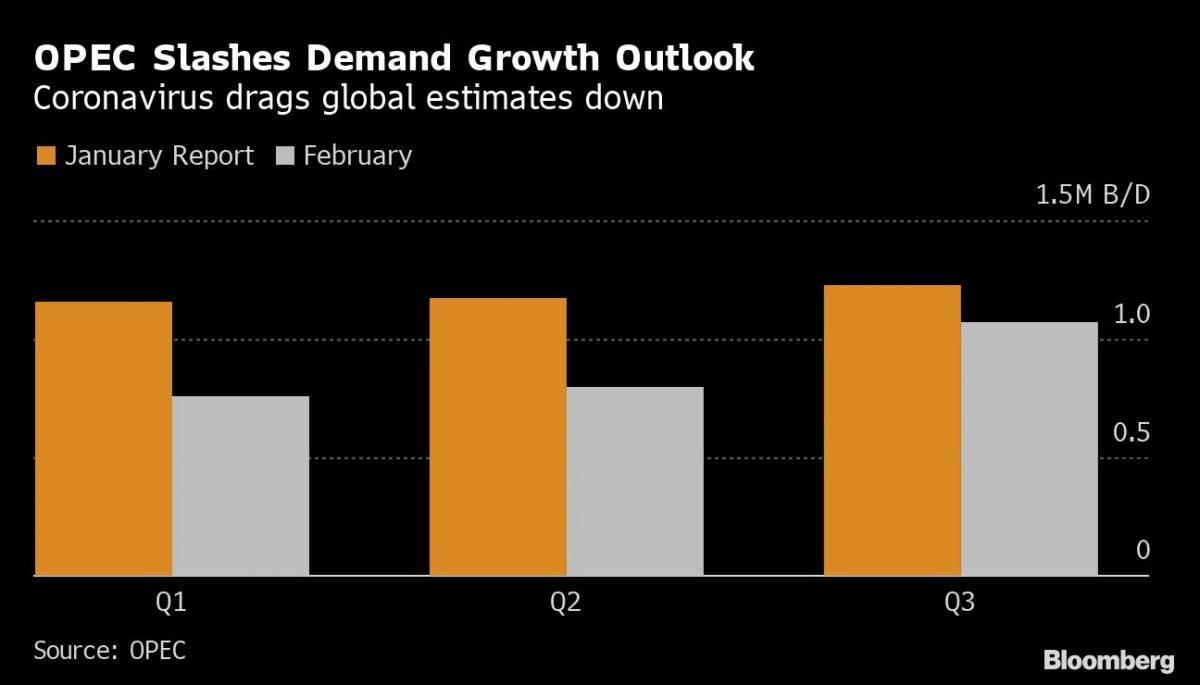 Futures fell 1.6% in New York amid persistent concerns of a massive supply glut. A key timespread on the American benchmark — a gauge of the health of the market — is at its weakest level in more than a decade as speculation grows that the main U.S. storage hub will fill to capacity.

This weekend’s OPEC+ agreement to slash production by 9.7 million barrels a day amounts to the largest coordinated cut in history, but is still dwarfed by the decline in oil consumption. Though estimates vary, leading trader Vitol Group expects demand to be down by 30 million barrels a day this month. Meanwhile, physical crude prices are trading far below futures contracts.

“The agreement of this weekend does not change anything with the very prompt supply and demand,” said Petromatrix GmbH Managing Director Olivier Jakob. “Stocks are building, so at the front of the curve, demand destruction is much bigger than supply destruction. There is only one place for crude oil to go and that is in storage.”

Cuts by the Organization of Petroleum Exporting Countries and its allies will start in May, removing almost a 10th of global output. Saudi Energy Minister Prince Abdulaziz bin Salman said Monday that the kingdom is ready to trim production even further if needed, but will only cut if others in the alliance curb their supply accordingly. He also said the more bearish demand forecasts may be too pessimistic, so the alliance may not need to make deeper cuts.
Prices:

WTI for May was trading about $7 below the contract for the following month, the biggest discount since 2009. That structure — known as contango — expanded after stockpiles at Cushing, Oklahoma, rose by the most since at least 2004 last week.

The move has also been exacerbated by the U.S. Oil Fund ETF selling its holdings of May futures and buying June. The fund will sell 37,000 futures on Tuesday, according to its website.

Texas oil regulators are scheduled Tuesday to discuss supply restrictions in response to the price crash, but KPMG International sees a low probability that cuts will be instituted. Texas pumps more oil than every OPEC member except Saudi Arabia. The U.S. was conspicuous as a hold-out on global output curbs, instead leaving it up to individual companies to steer production decisions.