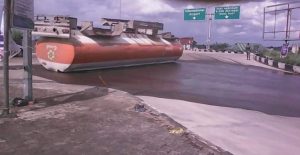 The tanker, according to eyewitnesses, turned upside-down while trying to negotiate the bend on top of the Obiri-Ikwerre flyover, along Nkpolu axis of the East-West Road.

Scores of people gathered with jerrycans, kegs and funnels to scope the leaking PMS, leading to heavy gridlock on the road.

Eyewitnesses who spoke to our correspondent at the scene, expressed fears that the incident may result to fire explosion if the area is not cordoned off.

An eyewitness, who gave her name as Vivian Obi, said: “The tanker was trying to navigate the Obiri-Ikwerre flyover bend, when we heard a loud bang.

“Before we know it, what we saw was that the tanker has somersaulted. Immediately, the products began to gush out, littering the road and running into the gutters.

“As if they were waiting for it, people just came out from nowhere and began scooping, which is very dangerous. I am afraid that if nothing is done, it may result in a fire explosion, especially since vehicles are still plying the flyover,” the eyewitness said.