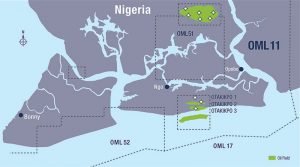 Governor Wike, in announcing the acquisition, said: “I am delighted to inform you that the Rivers State Government has fully acquired Shell Petroleum Development Company of Nigeria (SPDC) 45% interest in Oil Mining Lease (OML) 11 situated in Ejama Ebubu community in Eleme Local Government Area and the adjoining Ogoni and other communities of Rivers State”.

The governor, in a state broadcast titled “We will continue to advance the state’s interest, security and prosperity of all”, said his administration will always advance the best interest of Rivers State.

The announcement has, however, been met with opposition from major Ogoni organisations – the Movement for the Survival of Ogoni People, MOSOP, and the Conscience of Ogoni People, COOP – which rejected the acquisition and urged the Federal Government and security agencies to hold the state government accountable for any break down of law and order in Ogoniland.

Oil industry experts are asking whether what Rivers State bought was SPDC’s 30 percent stake in the Shell JV interest on OML 11 or the entire JV interest of 45 percent held together with international oil companies, Total of France and Italy’s Eni. Specifically, OML 11 has SPDC as the operator, but it is a joint venture between the Nigerian National Petroleum Corporation, NNPC, with 55 percent; SPDC, 30 percent; Total SA, 10 percent; and Eni, 5 percent.

When SPDC spokesman, Mr Bamidele Odugbesan, was contacted on the matter, he declined to comment, noting that issues surrounding OML 11 are subjudice.

Speaking further on the development, leader of COOP, Chief Gani Topba, said it was impracticable that the Rivers State Government will claimed to have acquired SPDC’s 45 percent interest in OML 11, when all that SPDC has in the asset is 30 percent.

Topba accused the Rivers State Government of exploiting the debacle between SPDC and the Ogoni people, by moving to acquire SPDC’s stake against Ogoni interest as well as to sabotage the supreme price paid by the Ogoni forebears in seeking justice for an oppressed people.

He said there was no subsisting OML 11 lease which could have been acquired by the state government as, according to him, the OML 11 lease had expired and was yet to be renewed by the Federal Government for Shell or any other entity.

“It will interest you to know that OML 11 operated by SPDC expired on 30 June 2019. Although SPDC made effort to renew same in 2017, the Minister of Petroleum Resources in the exercise of his discretion following our protests, decided against renewal with the result that OML11 lapsed by effluxion of time and has ceased to exist.

“SPDC has lost OML 11 (Ogoni fields) due to the failure of the Minister of Petroleum Resources to renew the lease in accordance with the Petroleum Act. We maintain that SPDC is under international obligation to pay to the Ogoni people reparation of $30 billion, as reparation for the wanton environmental and human rights breaches committed in Ogoniland, as demanded by our forebears,” Topba stated.

Gani Topba urged the Rivers State Government to redirect its investment to other assets and oil mining leases already renewed for SPDC for the greater good of the state.

He said: “We advise that the Rivers State Government should retrieve whatever Rivers money that may have been paid in the belief that it will acquire any stake in OML 11, as the maxim, “nemo dat quod non habet” (no one can give what he does not have) applies.

He also urged the Rivers State Government to redirect its investment towards the revamping and bringing on stream economically viable assets of the state inherited from previous administrations, listing these to include Songhai Farm, Rivers State Banana Farm, Rivers State Fish Farm Buguma and RisonPalm, among others.

Similarly, the President of MOSOP, Fegalo Nsuke, said SPDC was attempting to escape liability in an asset takeover by Rivers State Government, warning that his group will resist any attempt to transfer titles of Ogoni oilfields to anybody or group.

Nsuke said the move by the Rivers State Government is regrettable as it raises concerns about Ogoni people’s safety, stifles their hopes of a peaceful resolution of the Ogoni conflicts, disregards the concerns of the Ogoni people as documented in the Ogoni Bill of Rights and threatens the peace of Ogoniland.

“MOSOP wishes to dispel the misconception implied in the statement by the Rivers State Government and to make its position unequivocally clear that the oil in Ogoniland does not belong to the SPDC and therefore the company did not transfer title to assets not owned by it to anybody, group, institution, community, organisation or government.

“We note that even judging by the highly discriminatory Nigerian laws, the oil in Ogoni legally does not belong to Shell (SPDC) and therefore Shell could not and cannot transfer title of the Ogoni oilfields to any interested party.

Meanwhile, SPDC has declined comments on the acquisition of its 45 percent stake in OML11 by the Rivers State Government.

SPDC Media Relations Manager, Bamidele Odugbesan, confirmed that the announcement made by Governor Wike was in respect to the company’s assets which, according to him, was pending in court.

“The announcement by the Rivers State Government is in respect of the assets of SPDC which form part of a matter that is pending in court, for which reason we are unable to make further comments,” Odugbesan said.