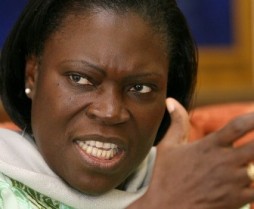 26 November 2012, Sweetcrude/African Press Organization (APO), LONDON, United-Kingdom — Simone Gbagbo must be transferred immediately by Côte d’Ivoire to The Hague for an investigation into her alleged role in crimes against humanity, Amnesty International said after the International Criminal Court (ICC) revealed it had an outstanding warrant for her arrest.

On Thursday the ICC unsealed an arrest warrant it had issued for Gbagbo in February of this year, on four counts of crimes against humanity during post-election violence in 2010 – murder, rape and other forms of sexual violence, and other inhumane acts and persecution. Her husband, former Ivorian President Laurent Gbagbo, was transferred to the ICC last November after the Court issued an arrest warrant for him on charges of crimes against humanity.

In the ICC arrest warrant, Simone Gbagbo – known to have been under official house arrest as of last month in Odienné in northern Côte d’Ivoire – is accused of being an indirect co-perpetrator in these crimes and is described as her husband’s “alter ego”.

“When the Ivorian authorities transferred Laurent Gbagbo to face investigation at the ICC, it was a key step towards addressing impunity for past abuses in Côte d’Ivoire,” said Tawanda Hondora, Deputy Director of Amnesty International’s Law and Policy Programme.

“Now Simone Gbagbo must also be transferred to the ICC without delay to ensure full cooperation with the Prosecutor’s investigation, and the transfer must be conducted in line with the procedures set out in the Rome Statute.”

Since October 2011, the ICC has been investigating crimes under international law committed in Côte d’Ivoire during post-election violence between pro-Gbagbo and pro-Alassane Outtara forces a year earlier. Amnesty International has repeatedly called upon national authorities and the ICC Prosecutor to investigate alleged war crimes and crimes against humanity by both sides which the organization documented since 2002.

While both sides have been accused of crimes, the two ICC arrest warrants in relation to Côte d’Ivoire to date focus on alleged crimes by the Ivorian Defence and Security Forces (“FDS”) and youth militias and mercenaries who were loyal to President Gbagbo.

“Justice must be delivered to victims on all sides,” said Hondora.

“This means that both the ICC and Ivorian justice system must fully investigate possible suspects on both sides and address the full range of crimes, including sexual violence.”

Côte d’Ivoire is not a state party to the Rome Statute which set up the ICC, but granted the Court jurisdiction over crimes under international law that were committed in the country since 2002.

Amnesty International continues to urge Côte d’Ivoire to ratify the Rome Statute, implement it fully in national law and conduct full investigations into alleged crimes on all sides from 2002-2010.