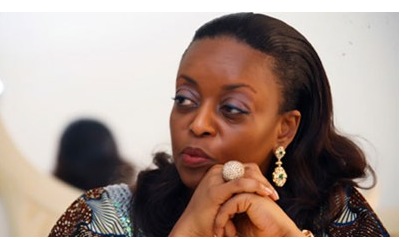 02 November 2017, Sweetcrude, Abuja – A Federal High Court in Lagos on Wednesday refused an application by a former Minister of Petroleum Resources, Mrs. Diezani Alison-Madueke, seeking to be joined in a N500 million criminal charge.

In his ruling on Wednesday, Justice Mohammed Aikawa held that the application by the ex-petroleum minister was not only a misuse of court processes, but a deliberate attempt to evade justice in the UK.

The Economic and Financial Crimes Commission (EFCC) had arraigned a Senior Advocate of Nigeria, Dele Belgore, and a former Minister of National Planning, Prof. Abubakar Suleiman, on a five count charge bordering on N500 million fraud.

Belgore and Suleiman had pleaded not guilty to the charges. Alison-Madueke, said to be “at large”, was named an accomplice in the criminal trial of the duo.

The former petroleum resources minister had on Oct. 6, through her lawyer, Mr. Onyechi Ikpeazu, urged the court to compel the Attorney General of the Federation (AGF) to extradite her to Nigeria from the United Kingdom to defend the charges against her.

On Oct. 30, defence and prosecuting counsels had argued their various motions before the court, both in support and against the joinder of Alison Madueke.

The EFCC, in a counter-affidavit, urged the Court not to order the return of the former minister from the United Kingdom to Nigeria.

The anti-graft agency described Diezani’s prayer to be brought back to Nigeria as a ploy to escape justice in the UK, where, according to the EFCC, she is being investigated for several financial crimes by the Metropolitan Police.

According to the EFCC, investigation by the Metropolitan Police in Diezani’s case had reached an advanced stage and her prosecution in the UK was imminent.

It, therefore, said it would not be in the interest of justice to grant Diezani’s application seeking to return to Nigeria.

The judge, Justice Aikawa, had then reserved his ruling until November 1.

Justice Aikawa said in his ruling: “This is not the proper time to join the applicant as a defendant. The applicant has aroused my curiosity as to why she waited this long before coming up with the application for joinder.

“The court lacks the power to interfere with the powers of the AGF. The application for joinder is lacking in merit and same is hereby dismissed.”

The judge adjourned the case until Nov. 13 and November 14 for the continuation of trial.

In his argument for joinder at the last adjourned date, Ikpeazu had argued that from count one to count four, Allison-Madueke was mentioned as an accomplice, adding that it would be in the interest of justice to join her in the charge.

Persuasively citing the authority of FRN vs Jide Omokore, FHC/Abj/CR/121/2016, which he argues bears similarity with the instant case, he had noted that the judge had struck out the charges on similar grounds.

He had submitted: “We will have no objections if the applicant’s name is extracted from the charge, then, trial can proceed. Otherwise, she should be included in the charge. I know that she will be happy to come and face the trial.”

Objecting to the motion for joinder, counsel to the first accused, Mr E. O Shofunde (SAN), informed the court of his counter affidavit filed in opposition to the application.

Firstly, Shofunde argued that the applicant was not a necessary party to the suit since in the end, the court will only decide the guilt or innocence of the first and second accused who were charged.

In his response, the prosecutor, Mr Rotimi Oyedepo, hinged his argument in alliance with the first defence counsel and vehemently opposed the application for joinder.

Oyedepo submitted that if an amendment is allowed at this stage, it will occasion a miscarriage of justice.

He added that several attempts were initially made to interrogate Alison-Madueke but that she fled to London after she got wind of the move by the EFCC.

According to Oyedepo, it is misconceived and too late in the day for the applicant to now seek to be joined in the charge when she is already under investigation in London.

He submitted that whenever the applicant returned to Nigeria, she can still be tried, as time does not run against the prosecution in criminal trial.

In the amended charge, Alison-Madueke was alleged to have conspired with Belgore and Suleiman on or about March 27, 2015, to directly take possession of the sum of N500 million, which they reasonably ought to have known forms part of proceeds of an unlawful act.

The trio was also alleged to have taken the said funds in cash, which exceeded the amount authorized by law, without going through the financial institutions.

Belgore and Sulaiman were also alleged to have paid the sum of N50 million to one, Sheriff Shagaya, without going through any financial institution.