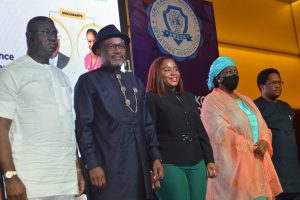 Lagos — The Executive Secretary, Nigerian Content Development and Monitoring Board, NCDMB, Engr. Simbi Kesiye Wabote has challenged young Nigerians to create business opportunities around uncomfortable situations rather than just complaining about them.

Speaking on the topic “Leadership, Youth, Entrepreneurship & Regional Cooperation – A National Perspective,” he charged youths to channel their anger against challenges in the country by innovating solutions and enterprises that would address such problems, adding, “feel free to complain bitterly about any situation you don’t like, but also put on you thinking cap make money out of it in a legitimate way.”

Executive Secretary recommended that “whether it is the nuisance of mosquitoes, the disgust you feel when you see heaps of refuse or pot-holes on our streets, or developing car-pooling app to decongest the road of too many vehicles, I encourage you to see every challenge or problem as an opportunity to wear your entrepreneurship cap to help humankind in your own little way and also prosper while solving the problem.”

He also charged youths to pursue their passions and avoid the crowds that complain about everything without proffering any solution, adding that such a disposition will only drag one into depression.

Speaking further, Wabote canvassed that for any society to avoid falling into decline, the mantle of leadership and entrepreneurship should fall on the youths from time to time. “It is the ideas and energy of the youth that enables us to do some amazing things today such as being able to connect with someone in the other end of the globe within seconds,” he added.

Discussing leadership, he advised individuals needed to cultivate leadership qualities to succeed in different endeavours of life, stressing that one did not need to be a political leader or a senior government official to demonstrate leadership qualities. He listed some of the attributes that would position a leader to achieve successful outcomes to include integrity, self-awareness, skilled communication, effective delegation and learning agility. Other qualities include shared vision and empathy.

He charged government and other groups like the JCI, Boys Scout, the Rotaract, and others to develop new strategies that would keep the large number of Nigerians youths engaged in useful activities and attract them into their fold.

Dwelling on entrepreneurship, Wabote indicated that entrepreneurs, especially the small and medium scale enterprises are the backbone of all thriving economies across the world. He noted that 96 percent of all businesses in Nigeria are owned by SMEs, and they are responsible for 84 percent of employment and contribute 48percent to the national Gross Domestic Product , GDP of Nigeria.

He added that the business environment in Nigeria is free and fertile for entrepreneurs and beckoned on youths to conceptualise business ideas that would thrive in the economy.