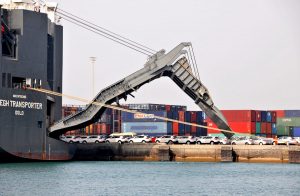 Port Harcourt — The Nigeria Customs Service, NCS, says it generated the sum of N38.8 billion in the first quarter of 2021, at Onne seaport in Rivers State.
Customs Area Controller, Onne Port, Auwal Mohammed, said the collected revenue was 69.4 percent higher than N22.9 billion collected between January and March 2020.
On export, Mohammed said the command processed 207,749.614 metric tonnes of cargoes with free on board value of $70.8 million,  comprising of cashew nuts, ginger, hibiscus flower, sesame seeds, zircon sand, palm kernel and tiger nuts, among others.
He charged officers and men in the Command to be uncompromising in collection of revenue and implementation of government directives on trade.
“A total of N38,877,314,286.12 revenue collected for the Federal Government for first quarter of 2021 by this command.
“A breakdown of the 2021 monthly collections shows N12,123,024,011.82 for January; N12,760,546,062.07 for February and N13,984,744,212.23 for March .
“All monthly collections for this year have so far surpassed those of the first three months of 2020 with remarkable differences from which hovered at slightly above N7b monthly,” he said.
On anti-smuggling, the Onne Customs boss said the Command also recorded a total of 12 seizures, with a cumulative duty paid value of N4,120,882,608.03.
He warned duty evaders to steer clear from Onne seaport, as they would be arrested with their wares seized in accordance with extant provision of the Customs and Excise Management Act.
He stated: “The seizures comprises of two units of used Mitsubishi buses; 210 bales of second hand clothing; 1,435 pcs of used tyres, used engine gear box and auto spare parts; 310 pallets of laser ketchup and 20 bales of fabrics.
“A month by month breakdown of the seizures indicates that four seizures were made in January which includes three containers and two suspects with duty paid value of N85,987,936.05.
“In February, the command made three seizures involving four containers with total duty paid value of N45,527,836.00, while in March 2021 it made five seizures involving seven containers with duty paid value of N3,989,366,808.89.”