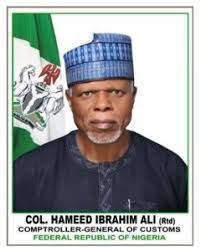 25 April 2018, Sweetcrude, Lagos —The Seme border Command of the Nigeria Customs Service, NCS, has taken its anti-smuggling campaign to the port of neighbouring countries to nip the menace in the bud.

In a statement, the Customs Area Controller, Comptroller Mohammed Aliyu said that the command has also commenced moves to gather classified intelligence on the berthing of some consignments in the neighbouring countries that are prohibited and restricted in Nigeria while targeting Nigeria as her final destination.

He said “Our strategies to work on such information are only disclosed when the information is effectively treated.

The command, therefore, remains resolute in the enforcement of the Federal government policies across the frontier.

“The surveillance of the command over the year has led to the arrest of over thirty-two thousand bags (32,000) of smuggled rice with a duty paid value of over ₦530 million attest to the command’s uncompromising stand to working in conformity to the current reforms of the CGC.

“The command has also made a total of 270 seizures with a duty paid value of ₦235million for the same period under review.”

“Being a renowned border that links most of the West African Countries within the sub-region, and its pivotal role in the economic development of Nigeria and West Africa at large, it is a known fact that the corridor has attracted both legitimate international and local travellers across the frontier, this international attraction is also accompanied by its dare consequences of illicit and illegal activities like smuggling, Drug trafficking, human immigration/trafficking, terrorism and money laundering amongst others.