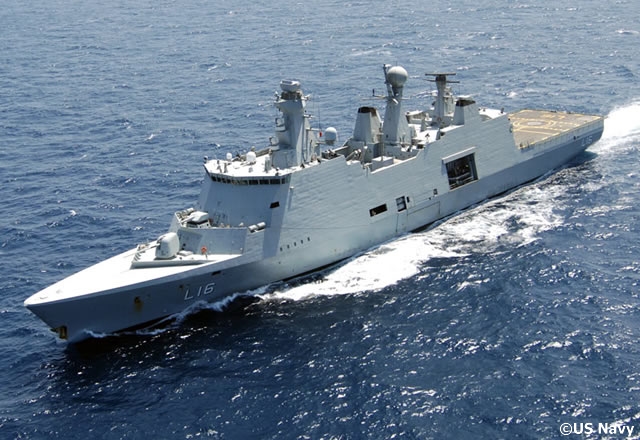 Lagos — Denmark has announced that it will deploy an Absalon-class Danish frigate equipped with a detachment of Danish Marines and helicopter to the Gulf of Guinea between November 2021 and March 2022.

The vessel will supplement Portuguese, Italian, and Spanish naval vessels that are already deployed in the region under the EU “Coordinated Maritime Presence” (CMP) framework but will be deployed under a national mandate.

The deployment is aimed at deterring pirates from attacking commercial vessels and providing support to commercial shipping throughout the region. The vessel will provide escorts to civilian ships and carry out rescue operations following attacks.

This announcement comes after a sustained period of lobbying by Maersk which had called for the deployment of an international mission similar to that of the European Union in the Gulf of Aden to tackle piracy.

In November 2020 the Danish Defence Minister discussed the topic of maritime security within the Gulf of Guinea in a focused meeting with the CEO of Danish Shipping company Torm, in January 2021 Denmark announced the appointment of a Danish Special Representative for Maritime Security in the Gulf of Guinea, Ambassador Jens-Otto Horslund.

Throughout the last 18 months a well-developed trend within the Gulf of Guinea has emerged that has seen a security vacuum emerge within the deep offshore domain. Pirates are increasingly operating further offshore where addressing the issue of piracy is beyond the unilateral capacities of individual coastal states which are already struggling to police their own territorial waters.

Notably within 2021 pirates have been shown to deliberately target areas beyond the EEZ of Nigeria with the intent of targeting vessels operating beyond the traditional footprint of domestic naval operations and the normal footprint of commercially provided Security Escort Vessels.

This increase in offshore incidents and the lack of capacity highlights the need for international naval engagement, specifically aimed at supporting the efforts of Domestic Naval operations. Unlike the CMP framework, which does not have a mandate to intervene in an attack, the Danish frigate will seek to conduct escorting duties and carry out rescue operations following attacks.

This substantive commitment is a significant step change in the support provided by international naval assets within the region and will likely serve as an example for other European Nations encouraging them to increase their engagement.

The operation is, however, likely to have several limitations, which reflect the wider systemic issue of coordinated international naval support to the Gulf of Guinea. Although the vessel will be deployed under Danish command and the Danish intent is to coordinate their contribution with allies and partners in the region, it remains unclear what the coordination with the EU CMP framework will look like. Moreover, it is yet to be clarified under what legal mechanism pirates will be prosecuted if intercepted by the frigate.

Nigeria is currently one of only a few regional states with the requisite counterpiracy legislation under which perpetrators of such incidents can be prosecuted successfully. Whilst this leaves considerable scope for partnered operations with Nigerian Naval assets, there are considerable issues around operations within international waters and with other regional states.

The operational footprint of the CMP and the forthcoming Danish operation are a further limiting factor in terms of effectiveness. Whilst such vessels will be able to transit high risk areas providing a visible deterrent under the auspices of right of free passage, the Danish vessels and those operating under the CMP are unable to conduct military operations within the EEZ of a foreign state without a clear framework through which to do so.

Antipiracy operations are mandated by the UNCLOS convention and this could serve as such a framework, however it remains to be seen whether this will be supported at a regional level.

The forthcoming deployment by Denmark of a naval asset to the region is to be welcomed. By launching such an asset with specifically laid down mission objectives inclusive of escorting and rescue, Denmark is showing considerable leadership and intent where others nations have remained alouf.

The deployment announcement stands in stark contrast to the glacial pace of support from international organisations which have thus far limited their involvement to capacity building, institutional reform and coordination. Whilst important these are but a small part of a much-needed package of measures that sees a coordinated effort both on and offshore. This will necessarily need to include robust investments into the development of coastal communities as well as international support for states in protecting their offshore domain.

The combatting of piracy within the Gulf of Guinea is too often reduced to questions of state responsibility, which whilst key, negate the moral component where international organisations are able to circumvent arguments of national interest and provide substantive action. It is with this in mind that the relevant international organisations need to acknowledge the significance of the crisis facing mariners within West Africa and hasten their pivot from the Indian Ocean to the Gulf of Guinea.