Lagos — After watching his four young children gobble up a meagre portion of beans straight from the saucepan, Nigerian farmer Gideon George will sleep on an empty stomach in the makeshift camp where the family ended up after their home was flooded.

George said the children were so hungry he did not have the heart to keep any for himself, and there was nothing else to eat that evening in the camp, a secondary school building in Rivers State, one of 32 Nigerian states hit by catastrophic floods. 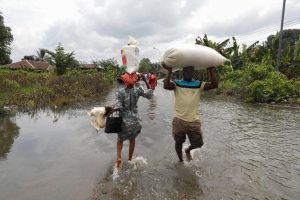 “They ate like people who need more, so like a father that I am I cannot go and join them,” he said. “I will sleep like that.”

The floods, blamed by the government on heavy rain and a water release from a dam in neighbouring Cameroon, have killed more than 600 people, displaced around 1.4 million and damaged or destroyed 440,000 hectares of farmland across Nigeria.

Experts say climate change is a factor, while defective infrastructure and poor planning, including a failure by Nigeria to complete a dam of its own that was supposed to backstop the Cameroonian one, had worsened the disaster.

For George, the nightmare started at 2 a.m. on Oct. 8, when his wife shook him awake and he saw flood waters pouring into the family home at such speed that there was nothing he could do except pick up two of the children. His wife grabbed the other two and they ran for their lives. 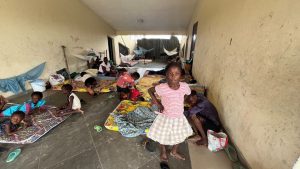 “The flood we saw, since I was born, I’ve never seen that kind of flood,” he said, adding that the water was carrying snakes and other animals as well as bottles and sticks that injured his legs as he ran.

NOT ENOUGH FOOD
The camp in the school building in the village of Ogbogu now shelters about 600 displaced people whose homes are under water. They are reliant for food on donations from individuals, oil companies that have operations in the area, and local authorities, but there is not always enough to satisfy everyone.

People are so desperate they are cooking with chaff that would normally be thrown away after grinding cassava to make garri, a staple food.

“This is not the real garri,” said farmer Iheukwumere Udah.

In the nearby village of Obagi, farmer Anthony Nnadi was in his house, wading through water that came up to the top of his thighs, trying to salvage random items, uncertain about what to do next but unable to tear himself away.

“This water confused us; me it confused me. I always forget what I am supposed to do because my heart is not at peace, my heart is troubled,” he said, as flip-flops and a water bottle floated in the room.

Nnadi said his family had been scattered by the flood, with several of his eight children stuck in other parts of the state, unable to come back because the roads had turned into rivers. He and those who remained were sleeping outdoors as there was no space in any of the makeshift camps that had sprung up, he said.

Back at the school camp in Ogbogu, George said he was thankful he, his wife and children were alive, but he felt very hopeless about the future because the flood had laid waste not just to his home but also to his farmland, his livelihood.