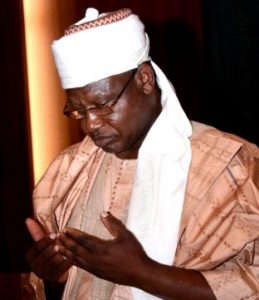 14 December 2018, Sweetcrude, Port Harcourt — The Ken Saro-Wiwa Associates on Wednesday accused the immediate past Minister of State for Environment, Ibrahim Usman Jibrin, of allegedly using Ogoni clean-up funds to procure his selection as the new Emir of Nasarawa Emirate in Nasarawa State.

Recall that the group had before now charged President Muhammadu Buhari to sack the minister, accusing him of inability to handle the Ogoni clean-up project as well as misappropriating the $10million initially released to the Hydrocarbon Pollution Remediation Project, HYPREP, for Ogoniland.

National Coordinator of the Ken Saro-Wiwa Associates, Chief Gani Topba, while reacting to the Minister’s resignation, said Jibrin despite his resigning, should be made to give account of how $10million Ogoni clean-up fund was spent.

Topba, who accused the former Minister of being a standing block to the Ogoni clean-up process, said there has been serious jubilation in Ogoniland over the news of the minister’s resignation.

According to him, “We have raised the issue before now that the Minister was using Ogoni clean-up fund to lobby for a kingship in his village, that is why we have been calling on the President to sack him.

“He must give account of the Ogoni money. Resignation will not save him, President Buhari who has been fighting corruption should compel him to give account of how he spent the initial $10million released by NNPC JV for the clean-up.

“His resignation is a welcome development to the people of Ogoni. In fact, as I am talking to you now, there is serious jubilation in Ogoni over the news of his resignation, because God has answered our prayers.

“The man has been a standing block to Ogoni clean-up. He looted our money, and cannot even give account.”

Topba also appealed to President Buhari, to appoint a new Minister of Environment that is credible and capable of handling the Ogoni clean-up project with transparency and accountability.

He, however, urged the people of Ogoni to remain calm and focused, saying that they will surely get to the promised land.

“President Buhari should bring a new person that will be focused on the clean-up project, and ensure the provision of portable water to the people as recommended by the United Nations Environment Program, UNEP.

“Anybody that is appointed as new Minister of Environment should relocate HYPREP office from Port Harcourt to Ogoniland.”