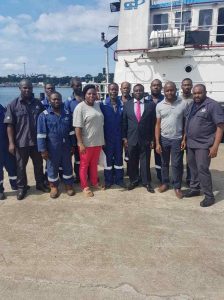 Lagos — The Nigerian-flagged vessel, MV CHARIS, which was attacked by unknown assailants on May 5 and subsequently rescued by the Spanish Navy and handed over to Equatorial Guinea, has been released.

The vessel, a tugboat owned by C and I Leasing, was attacked by pirates on Sunday, May 5, 2019.

The release of the vessel yesterday was facilitated by the Nigerian Ambassador to Equatorial Guinea, Ambassador Toko Ali Gongulong, with the assistance of the Defence Attaché, Navy Captain Seyi Oladipo, and officials of the Nigerian Maritime Administration and Safety Agency (NIMASA).

Reports had circulated on certain online news platforms earlier in the week claiming that Nigerian crewmen were arrested in Malabo, Equatorial Guinea, on suspicion of involvement in piracy activities.
The Vice President of Equatorial Guinea, Teodoro Nguema Obiang Mangue, also went on air, on their national radio, to announce that 10 sea pirates of Nigerian origin were arrested with regard to an attack on a vessel, MV BLUE MARLIN. It was on this premise that the Nigerian Ambassador, the Defence Attaché, and officials of NIMASA, in a combined effort, moved to correct the erroneous information and thereafter secure the release of the Nigerian crew.
Meanwhile, a clearer light on the details of the incident involving the Nigerian-flagged vessel, MV CHARIS, has now emerged. MV CHARIS is a tugboat, which was on its way to execute a vessel recovery contract in Equatorial Guinean territorial waters, when it was attacked by unknown armed assailants on Sunday, May 5, 2019.
The vessel was commandeered by the attackers and used to attack the much larger Maltese-flagged vessel, MV BLUE MARLIN, around the same area of the initial attack. However, in the latter case, the Captain of MV BLUE MARLIN was able to send a distress call, which was responded to by a Spanish Navy vessel.
It was the intervention of the Spanish Navy that stopped the attack, as the attackers took to their heels at the approach of the naval ship. The fate of some of the assailants is still undetermined.
Both MV BLUE MARLIN and the MV CHARIS were subsequently handed over to the Equatorial Guinea Navy by the Spanish Navy, as the incident was clearly in their jurisdiction.
Also Read: Belgium partners Nigeria to boost trade, investment in maritime
At this point, a misunderstanding of the specifics occurred between the arresting authorities because on arrival in Malabo, MV BLUE MARLIN was docked for repairs, with its crew treated decently, while MV CHARIS and its crew were detained by the police under threat of being charged with piracy, whereas they were equally attacked and hijacked by the pirates.
The eventual release of MV CHARIS and its crew was made possible by the joint effort of the Nigerian Ambassador, the Defence Attaché, and officials of NIMASA.