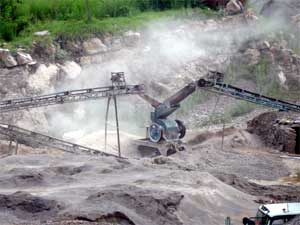 21 October 2011, Sweetcrude, Abuja- The Nigerian government has regularly trumpeted its desire to “diversify the source of revenue generation of the economy from oil,” and has never been shy to project the ever-resilient mining industry as the next best thing apart from crude oil. Recently, the government has held up dimension stone processing and production as the darling of the solid minerals industry, and a sure route to the creation of millions of jobs and, thus, wealth for the teeming masses of Nigerians.

This position appears to be catching on even internationally as indicated this year by the country’s participation at the one of the biggest and most colourful Dimension Stones Fairs in the world. Locally, too, there has been a lot of movement within the dimension stone sector, showing that perhaps local operators may have finally woken up to the potentials of the sector to create wealth. Indeed, the growing interest in Nigerian dimension stones by international market operators, has marked it as a valuable tool for the nation’s fledgling building and construction industry as well as for architectural designs.

Speaking recently at a Workshop on Fundamentals of Dimension Stone Quarrying Techniques, in Abuja, the Minister of Mines and Steel Development, Arc. Musa Mohammed Sada, noted that the workshop reflects government’s determination to grow the industry in line with overall policy on the utilization of natural resources for the economic growth and well-being of Nigerians.

Sada observed that the Nigerian basement complex is host to a wide variety of granites and marbles with attractive colours and textures, which have a huge potential for both domestic use and for export. He stressed that Nigeria is endowed with huge natural resources for the dimension stone industry, however, the potentials for the industry are undermined by the over-dependence on finished imported stones from Europe and Asia.

According to the Minister, “The cost of finished locally processed materials is considered too expensive, hence the high patronage of products from other countries.”

According to him, the development of dimension stones is one of the strategic interventions towards the rapid transformation of the minerals industry as a catalyst for economic growth, adding that over the past few years, the ministry has worked assiduously to implement a wide range of reforms to create a conducive environment for both government and investors. He said, “Government has provided the necessary transformation for an accelerated development of the sector. The private sector is hereby challenged t invest in mining. The dimension stone industry with its diverse downstream opportunities, including a large Nigerian and international market is no doubt a good business.”

He added that the workshop was put together to ignite interest of architects, builders and other stakeholders on “the large and beautiful deposits of Nigerian stones, the technical criteria for architectural stones and modern usage of stones in architecture.”

The Minister noted that in order to promote the Nigerian dimension stone industry, the Ministry through the World Bank-Assisted Sustainable Management of Mineral Resources Project (SMMRP) commissioned a baseline study to prepare a typical business plan for the development of the stone industry including the sourcing of plants and machinery (mine to market).

Sada explained that the study was carried out by “reputable international consultants from Italy,” adding that tremendous interest has since been shown in the development of the industry.

“Furthermore, as a follow up to the successful workshop, the organizers of the Marmotec Carrara Fair in Italy invited the country to participate in the 30th edition of the Fair, which held from May 18 – 25, 2010 in Carrara, Italy, where several granites and marble samples produced in Nigeria were exhibited.

“Nigerian stones were confirmed to be of large interest for most of the international market operators who attended the Fair in view of their attractive colours and high quality,” the Minister stated.

“From last year when I came on board we have close to eight new dimension stone firms coming up and this is largely due to the campaign that we mounted. We went to Italy, we got the experts to come here and they identified the stones and people were excited”. The minister stated that the country is targeting self sufficiency in dimension stones production, like it “will soon achieve in cement production which is mines based,” saying that government will soon ban the importation of the products.

Sada further remarked that organizers of the Marmotec Carrara Fair in Italy – one of the largest fairs on dimension stones globally – had invited Nigeria to participate in the 30th edition of the Fair, which held in May, 2011. According to him, the climax of the country’s participation in the Fair was the ‘Nigerian Day,’ which was organized and admitted in the official programme of the fair.

“There was official presentation on the Dimension Stone industry, its potentials and perspectives. This was well-attended by delegates from different countries. At the fair, Nigerian stones were confirmed to be of special interest to most of the international market operators who attended the Fair in view of their attractive colours and high quality,” the Minister stated.

He noted, however, that one major issue that came up for discussion during the fair was the European Union policy on the certification of all stone blocks imported into EU countries generally referred to as CE Marking. “This involves the technical evaluation of the quality of the stones for use in architectural and decorative designs. Some laboratories have been approved all over the world for the pre-evaluation of stones entering the EU countries. A session was devoted to guide non-EU countries participating in the Fair on the mechanisms for assessing stones and the CE marking.”

The Minister pointed out that the government delegation’s attendance at the Carrara Marmotec Dimension Fair in Italy brought into sharp focus some of the challenges faced by the country’s DS industry, and which are already being tackled, including the need to improve and support the DS exploration in the
Nigerian dimension stone industry; the need to educate experts in the construction industry on modern usage of DS in the construction and building industry.

Other challenges are the need for training of Nigerian personel on the DS quarrying and processing and the need to establish a World class DS testing laboratory in the country.

“I am happy to inform that President Goodluck Jonathan has approved a programme to facilitate the development of the sector to include organizing a construction industry workshop on dimension stones in the country, the engagement of international and local consultants to professionally classify Nigerian stones for development and the training of operators on dimension stone quarrying and processing techniques. Most importantly, and with the support of the Federal government, Nigeria has now established a world-class dimension stone testing laboratory, located at the National Geosciences Research Laboratories Centres (NGRL), in Kaduna, Kaduna State,” he noted.

He added that the outcome of the current government’s effort is the massive interest being generated among local and international investors in the industry. So far, he noted, four processing plants are currently being set up in the Federal Capital Territory, Abuja, and quarries are being developed in various parts of the country.

“Moreover, apart from local production, the dimension stone industry is continuosly gaining prominence in world trade and Nigeria, with its exotic granite and marble stones, has the potential of being a major exporting country,” Sada explained.

Sada explained that in order to promote Nigerian dimension industry, the Ministry through the World Bank-assisted Sustainable Management of Mineral Resources Project (SMMRP) commissioned a baseline study to prepare a typical business plan for the development of the stone industry including the sourcing of plants and machinery. He added that the study was carried out by reputable international consultants from Italy and the result of the study was presented to a stakeholders’ forum in June, 2009.

He added that the World Bank-assisted project also initiated a meeting with key indigenous operators in the industry, which culminated in the establishment of the Association of the Association of Dimension Stones Operators in Nigeria, ADSON. The objective of this effort, he noted, was to ensure a well-coordinated and organized DS sector in the country.