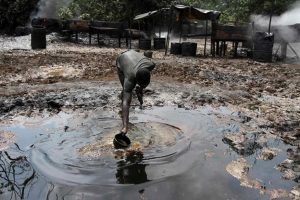 *Oil spill pollution in Bayelsa State, a part of the Niger Delta region

Port Harcourt — Stakeholders in the Niger Delta region have vowed to carry out legal action against the ongoing onshore and shallow water divestment by multinational oil companies over the environmental contamination caused by oil and gas activities in the area.
They said the international oil companies, IOCs, must first remediate the environment before the divestment.
The stakeholders at the Conference on Oil Company Divestment in the Niger Delta,  accused the oil majors of taking criminal flight in the name of divestment, in order to evade responsibility for decades of air, land and water pollution in the region.
Executive Director of We The People, Mr Ken Henshaw, warned that if the oil companies were not held accountable now, the entire Niger Delta region would become like Oloibiri, which he described as “abandoned museum of fossil fuel monuments.”
Henshaw said the oil companies were not being asked to stay, but only to restore the environment the way it was in 1956 before oil and gas exploitation and the concomitant pollution became the norm.
He maintained that global appetite for crude oil was reducing by the day as more countries were pulling out of the fossil fuel sector because of climate change concerns and wondered what will happened to the contaminated Niger Delta environment when the country eventually moves to cleaner sources of energy.
According to him, “We must hold these companies accountable today because tomorrow will be too late. We will use all available legal means to hold the companies accountable. The people of the Niger Delta will go to court. We have been slow already. We should have gone to court already.
“In the coming weeks, the people of Niger Delta will institute a class action halting the divestment by oil multinationals.
“We are not asking them to stay, we are simply asking them to assess the level of environmental damages they have caused, restore their health and livelihoods and fix their environments before you go.
“If you rent a house, when you’re packing out, you restore any damaged property in the house back to how you met it. The Niger Delta today is not how the oil companies met it in 1956, and we will use every legal method to hold them accountable.”
Similarly, Executive Director of Policy Alert, Mr Tijah Bolton-Akpan, regretted that the Petroleum Industry Act provides widow for oil multinationals to divest criminally.
“The just concluded COP27 was anchored on loss and damage; which loss and damage is greater than the damages incurred by the Niger Delta communities for 65years of criminal extraction of oil and gas from our backyards?
“Loss and damage should be the next lens from which the divestment by IOCs from the Niger Delta should be looked at,” he said.
On his part, the spokesperson of the Pan Niger Delta Elders Forum, Chief Ken Robbinson, lamented that regulatory agencies have all been compromised, corollary with the weak laws in the country.
“The major reason why the Niger Delta environment is in a mess is because regulation is very poor. We need stronger institutions.”
Also, a Public Health Physician and Environmental Advocate, Dr. Bieye Briggs,
explained that pregnant women in the region were already at risk of birthing newborn babies with birth defect, and called for immediate halt on hydrocarbon pollution in the region.
“Cancinogenous effects of hydrocarbon pollution alter the normal formation of the human organs. Pollution contributes to infant mortality, through preterm delivery, low birth weight, acute respiratory distress syndrome, congenital malfunctions, pneumonia etc,” he stated.