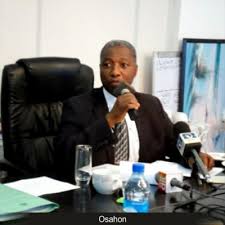 14 January 2015, Sweetcrude, Abuja – The Federal government has announced plans to revoke the licences of the operators of non-perfoming or idle fields, especially the marginal field owners, in March this year.

The country has 315 oil fields in total but out of this number, only 218 are currently productive with about 97 oil fields lying idle. This is despite dwindling production figures and falling oil prices which has put a lot of pressure on the national economy.

The Director, Department of Petroleum Resources, Mr. George Osahon, blamed infrastructural deficiency, insecurity and communal unrest, ownership and partnership problems, contracting and procurement issues, and technology deficit as the major factors stalling the development of most of the oil fields.

The upstream arm of the Nigerian petroleum industry has 85 operating companies, but only 33 are production entities, according to figures obtained from the Department of Petroleum Resources.

The country currently has 2,800 oil producing wells, with the number of flow stations/plants put at 130.

The DPR also puts the amount of oil blocks awarded at 170; of which 68 have Oil Prospecting Licences, while 102 are Oil Mining Leases.

The agency also plans to undertake more seismic data coverage for better regional and basinal studies, and drilling of exploration wells in the short to medium term.

The agency said it was working towards active exploration drilling and drilling for deeper players in the short to medium term.

To sustain the reserves, it hopes to implement enhanced recovery methods for the short, medium and long terms; and also achieve unitisation of non-straddled reservoirs in the short to medium run.

It is also considering bitumen exploration and exploitation in the short, medium and long terms; while developing small (marginal) fields.

The DPR is also targeting frontier exploration in ultra-deep water and inland basins, with regular licensing rounds to ensure continued exploration and production activities in the short to medium terms.

Short term, according to the agency, is between one and five years; medium term, five to eight years; and long term, eight years and above.

The DPR said, “The Niger Delta is finally showing signs of maturity as its reserves are beginning to drop. The negative trend in reserves is a major industry concern, considering the importance of oil and gas to the national economy

“A combination of methods would be required to drive exploration and boost reserves within the matured Niger Delta and frontier basins, including the bitumen belt.”

The agency, which is targeting new hydrocarbons from frontier exploration, said it believed that the inland basins held huge accumulation of resources that were yet to be explored.

On the ultra-deep offshore, it said, “The ultra-deep waters frontier is yet to be fully explored in spite of its potential.

“With present day-technology and the success achieved in the deep offshore, ample opportunities exist in encouraging aggressive exploration through periodic licensing rounds.”

This, it noted, informed its recent announcement of March 2015 as the deadline for non-performing marginal field operators.