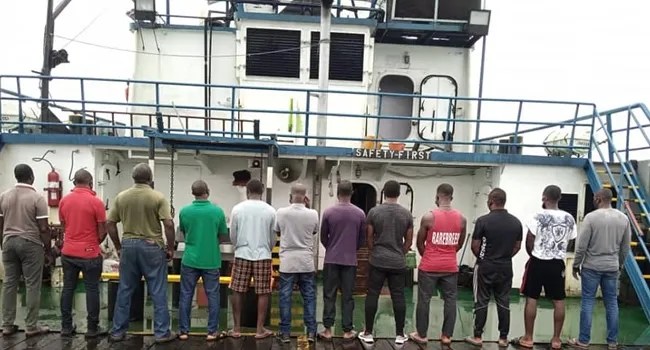 Port Harcourt — The Nigerian Navy has handed over 25 individuals suspected to be engaged in illegal oil bunkering and two vessels, arrested along the Bonny channels, with over 1.3million litres of crude oil and 456,431 litres of Automotive Gasoline Oil, to the Economic and Financial Crimes Commission for investigations and prosecution.

The vessels, MT Bright Hope and MV Johanna, were arrested for involvement in crude oil theft, possession of illegally refined AGO, switching off of Automatic Identification System, and non-possession of regulatory documents from the Nigerian Maritime Administration and Safety Agency.

Oladejo said MV Johanna II, identified as a supply vessel flying Nigerian flag with 12 crew members, all Nigerians, was arrested last Wednesday, at the Bonny Fairway Buoy with 394,000 liters of AGO, without approval and with its Automatic Identification System was switched off.

He added that the vision of the Chief of Naval Staff, Vice Admiral Awwal Gambo, to deploy all necessary measures to curb economic sabotage remains the focus of the Nigerian Navy, in line with its constitutional mandate of securing the nation’s maritime territory.

“We are handing over two vessels MT Bright Hope and MV Johanna II to the Economic and Financial Crimes Commission. These vessels were arrested on the 14th of July 2021 for committing infractions on crude oil theft, and possession of illegally refined AGO.

“MT Bright Hope was arrested with over 1,371,256 liters of crude oil and we all know what this will translate to in Naira. Same vessel was arrested with over 62,431 liters of illegally refined AGO in some of its compartments without approval. If every vessel in this act continues to perpetuate this crime un-arrested it means that Nigeria could be in trouble.”

Assistant Superintendent of the EFCC, Arasah Shaka, took over the suspects and the vessels on behalf of the EFCC, assured that investigations would be conducted to ascertain the offences leveled against them, while prosecution will follow if they are found culpable.

Shaka also disclosed that the EFCC has made tremendous progress in the fight against economic crimes such as oil theft, illegal bunkering and sundry crimes.

“We are officially taking over the arrested vessel MT Bright Hope and MV Johanna II. Upon taking over of these vessels, we will commence investigation immediately and thereafter prosecute them if found guilty of the offence.”

“Over the years we have been experiencing a lot of conviction of persons, both arrested vessel and internet fraud cases. This is not the first vessel we are taking over, in due course you will get the update of this investigation.”