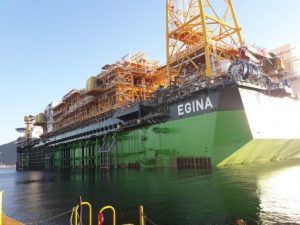 14 January 2019, Sweetcrude, Lagos — Nigeria’s much-awaited multi-billion dollar Egina project came on stream about 24 hours to the end of 2018. First oil flowed out at 11.20pm on December 29 on the Egina Floating Production Storage and Offloading, FPSO, unit; in the process, adding 200,000 barrels of oil per day to the country’s crude oil production.

Located in 1,600 metres water depths and 150 kilometres off the coast of Nigeria, the giant Egina field was developed and is operated by the French major Total.

The 200,000 barrels per day output from the development represents about 10 percent of Nigeria’s oil production.

“Total is proud to deliver a project of this size under the initial budget and to contribute to the development of Nigeria’s oil and gas sector by generating employment as well as building industrial capability.

“Egina will significantly boost the group’s production and cash flow from 2019 onwards, and benefit from our strong cost reduction efforts in Nigeria where we have reduced our operating costs by 40 percent over the last four years,” Arnaud Breuillac, President, Exploration and Production, said as he announced the delivery of the project.

He added: “Furthermore, some upside potential nearby remains to be developed and we are studying in particular Preowei discovery tie-back to the Egina FPSO.” The $4 billion floating production storage and offloading unit used to develop the Egina field is the largest one Total has ever built.

In announcing the take off of the project, Total said it saw a record level of participation of local contractors. Six of the eighteen modules on the FPSO were built and integrated locally, and 77 percent of hours spent on the project were worked locally.

Start up was achieved close to 10 percent below the initial budget, which represented more than 1 billion dollars of capital expenditure or capex savings, Total said, adding that this was due, in particular, to excellent drilling performance where the drilling time per well was reduced by 30 percent.

Initially discovered in 2003, the Egina field is the second development in production on the Oil Mining Lease, OML, 130 following the Akpo field, which started-up in 2009. The Preowei field is another large discovery made on this prolific block for which an investment decision is scheduled for 2019.

With the project’s take off, Total is poised to start exports of crude from the new offshore field, adding to global supplies at a time when oil prices are plunging.

Shipments of Egina have been scheduled for February, according to a copy of a loading programme for the new grade seen by Bloomberg. Initial exports should be just over 100,000 barrels a day but could double in the following months.

The extra supplies will arrive at an awkward moment for an oil market that has seen prices for benchmark Brent and West Texas Intermediate grades plunge by more than $30 a barrel since early October. The project will also bolster Nigerian production when the country is meant to be restricting supplies to help the Organization of the Petroleum Exporting Countries, OPEC, and its allies avert a glut.

Indeed, the birth of the Nigerian crude grade was announced to the international oil market just after Christmas – a day before actual production from the field began.

A Reuters report had indicated that the Egina crude had been added to the February loading programme. Total, China’s CNOOC, and state oil firm, the Nigerian National Petroleum Corporation, NNPC, will each have a cargo of Egina in February, traders said. No offers have yet been seen, Reuters reported.

Egina is the first of a series of projects that are intended to revive Nigeria’s oil production into the next decade, while also increasing the share of output from offshore facilities and thus minimising risks from sabotage and crude theft.

Total, the field’s operator, will handle shipments from the Egina FPSO, the largest facility of its kind ever built by the French company.

Nigeria agreed on December 7 to curb its output when OPEC and allied producers met in Vienna. The nation will have to cut supplies starting this month by about 40,000 barrels a day under the deal.

Nigerian crude production has dipped in recent years, and stood at about 1.76 million barrels a day in November.

Exports of 200,000 barrels a day would make Egina a bigger grade than all but three Nigerian crudes, based on January loading-programme data compiled by Bloomberg.

Also, sixteen oil and gas firms have submitted applications for one or more of five Ghanaian offshore blocks in the West African country’s first exploration licensing round, its energy ministry said.