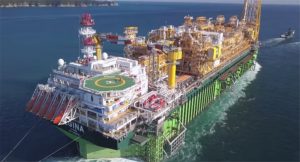 07 September 2018, Sweetcrude, Lagos — Reasons behind the demand for an extra $300 million by Samsung Heavy Industries from Total for the fabrication of the Egina Floating Production Storage and Offloading vessel, has been revealed.

The $3.3 Egina FPSO had arrived Nigeria amidst pomp and pageantry from South Korea on January 24.

It left the shores of LADOL for the Egina oil field late last month.

A source close to the situation disclosed that SHI was the lowest bidder for the project and had given out “too much bribe to some corrupt Nigerians” who in turn helped it lobby for the contract.

It was alleged that LADOL was also involved in the “heavy bribing” which eventually saw the vessel birthing in its yard in Lagos.

Prior to the Egina FPSO project, Nigerdock located on Snake Island was the poster-boy for the celebration of Nigerian Content Development ‘but that was before Ladol partnered with SHI.

According to our sources, the heavy bribes which had exchanged hands while bidding for the contract had led SHI to demand an extra $300m from Total.

“So Samsung wanted to recoup the money. When LADOL then sensed the Korean company wanted more money, it also started demanding an extra one percent”.

“Samsung kicked against Ladol’s extra one percent and started discouraging others like Shell not to give its project to LADOL”, one of our sources said.

The controversy had resulted in the trio dragging one another to court, and SHI, SweetCrudeReports gathered, is insisting on collecting the extra $300m before finally releasing the vessel to Total.

The vessel which left Lagos late last month is yet to arrive the Egina oil field.

Further findings showed that the race is still on, as both LADOL and Nigerdock are currently bidding for the Zaba-Zaba project.

Earlier in the week, SweetCrudeReports reported that LADOL had kicked SHI out of its yard due to the expiration of its operating license and a breach of Nigerian Contents laws.

SweetCrudeReports also learnt that SHI is currently under investigation by the Economic and Financial Crimes Commission, EFCC, the Nigerian Content Development and Monitoring Board, NCDMB and the SSS for fraud.