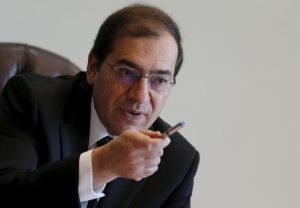 *Tarek El Molla, Egypt’s Minister of Petroleum and Mineral Resources speaks during an interview with Reuters at his office in Cairo, Egypt. REUTERS/Amr Abdallah Dalsh

25 April 2018, News Wires – Egypt aims for foreign investment in the oil and gas sector to reach about $10 billion in the 2018/19 fiscal year that begins in July, Petroleum Minister Tarek El Molla said.

Molla said he expected foreign investments to total the same amount for the current fiscal year, marking a 25 percent increase from the previous year.

The 25 percent gain comes as a result of foreign companies investing in major gas projects in the Mediterranean, he said.

Egypt aims to increase its gas production from newly discovered fields, which include the mammoth Zohr asset discovered by Italy’s Eni in 2015.

Once a gas exporter, Egypt hopes to halt imports by 2019.