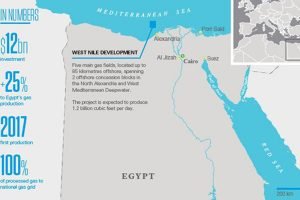 16 September 2018, Cairo — Egypt has signed a deep-water oil and gas exploration deal with Royal Dutch Shell and Malaysia’s Petronas worth around $1 billion for 8 wells in the country’s West Nile Delta, the petroleum ministry said on Saturday.

The country also signed a second $10 million deal with Rockhopper, Kuwait Energy and Canada’s Dover Corporation for exploration in the Western Desert, a ministry statement said.

Egypt aims to be a regional hub for the trade of liquefied natural gas (LNG) after a string of major discoveries in recent years including Zohr, which holds an estimated 30 trillion cubic feet of gas.