Evergreen
Home Financing Egypt’s headline inflation quickens to 13.5% in May

Egypt’s headline inflation quickens to 13.5% in May

Cairo — Egypt’s annual urban consumer inflation accelerated to a slower-than-expected 13.5% year-on-year in May, data from the state statistics agency CAPMAS showed on Thursday. 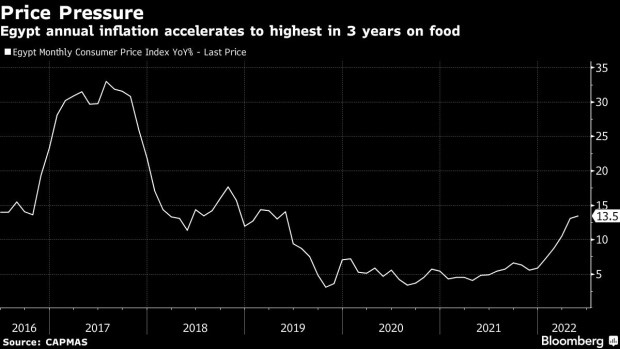 The increased inflation could nevertheless impact the central bank’s monetary policy committee when it meets on June 23. Citing rising inflation, the committee raised its interest rates by 200 basis points at its last meeting on May 19.

At the time, the committee said it would temporarily tolerate an inflation rate that was higher than its target of between 5% and 9% in the expectation that price increases would slow after the fourth quarter.

Core inflation increased to 13.3% year on year in May from 11.9% in April, data from the central bank showed.

Monthly urban consumer inflation, at 1.1%, “was impacted by food items such as bread and cereals, oils and fats and seafood, offsetting the sharp drop in vegetable prices and the favorable base year impact,” said Allen Sandeep of Naeem Research.