WASHINGTON — The U.S. Energy Information Administration (EIA) forecasts lower crude oil prices in the fourth quarter of 2019 and in 2020 despite tighter global balances.

The tighter balances are largely the result of unprecedented short-lived loss of global supply following the September 14 attacks on crude oil production and processing infrastructure in Saudi Arabia.

The production declines contribute to overall stock draws in the second half of 2019 with a relatively large stock draw in the third quarter. In the fourth quarter, however, EIA forecasts global supply growth will outpace global demand growth, resulting in an inventory build, offsetting some of the third quarter draws (Figure 1). 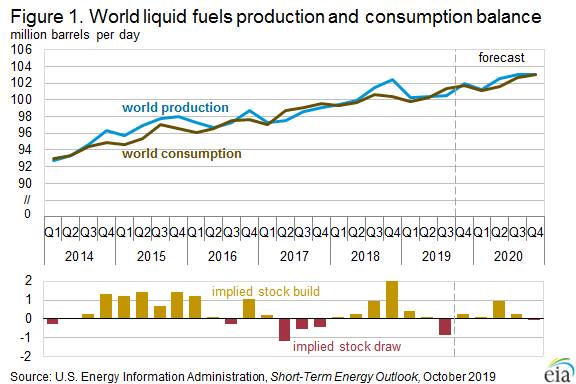 In the October STEO, EIA forecasts total global petroleum stocks in the second half of 2019 will decrease by an average of 290,000 barrels per day (bpd), compared with the September STEO forecast stock build of 250,000 bpd for the same period. EIA forecasts total world crude oil and other liquids production for the second half of 2019 to average 101.3 million bpd, down by 550,000 bpd from the September STEO.

Most of the production decline is the result of lower output from Saudi Arabia, reducing the collective output of the Organization of the Petroleum Exporting Countries (OPEC) to 34.8 million bpd for the second half of 2019.

The increase was larger in the front months of the futures strip than in the later months, indicating the market expected the outage to be relatively short lived, and prices fell quickly after the attack (Figure 2). Saudi Arabia continued to export crude oil by drawing from inventories, increasing production in other fields, and reducing domestic refinery inputs. Abqaiq’s relatively quick return to operations likely lessened the extent and duration of the price increases. Brent front-month futures prices fell to lower than pre-attack levels on October 1, settling at $59/bbl for the December contract and have fallen slightly since then. 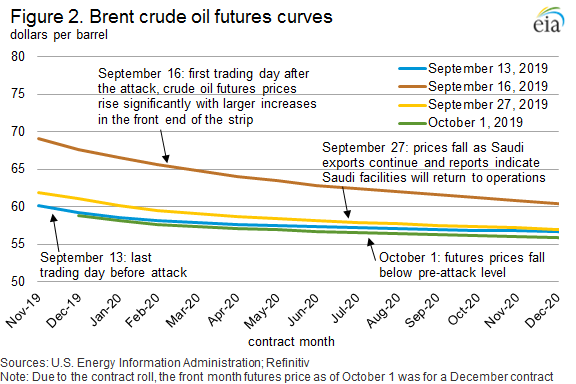 The price forecast is highly uncertain and supply or demand factors may emerge that could move prices higher or lower than EIA’s current STEO forecast. Driven by revisions to global economic outlook, EIA has revised its 2019 liquid fuels demand growth outlook lower in the STEO for the last nine consecutive months and 2020 consumption has been revised down eight of the last nine months. EIA’s price forecast also accounts for a higher level of petroleum supply risk in the aftermath of the attacks in Saudi Arabia.