The EIA projection which runs through 2050 says exports are highest, and grow throughout the projection period, in the High Oil and Gas Resource and Technology case, as favourable geology and technological developments combine to produce oil and gas at lower prices. The High Oil Price case provides favourable economic conditions for producers while restraining domestic consumption, enabling the most rapid transition to net exporter status. In all cases but the High Oil and Gas Resource Technology case, which assumes substantial improvements in production technology and more favourable resource availability, U.S. production declines in the 2030s, which slows or reverses projected growth in net energy exports. 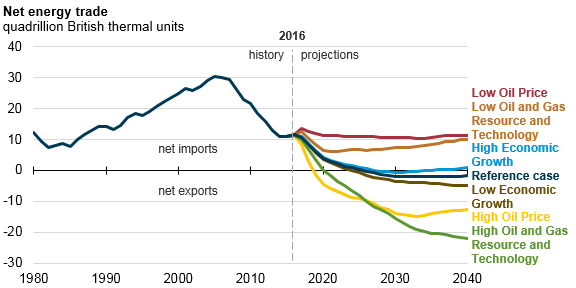 “EIA’s projections show how advances in technology are driving oil and natural gas production, renewables penetration, and demand-side efficiencies and reshaping the energy future,” said EIA Administrator Adam Sieminski. “The variation across the analysis cases of projected net energy export levels—as well as other findings in AEO2017— demonstrates the importance of considering the full set of AEO cases.”

In order to better focus EIA’s resources on expanding its understanding of the rapidly evolving energy markets, as well as to better represent new information in EIA’s models and publications, starting with AEO2015, EIA has adopted a two-year release cycle for the AEO. A full edition of the AEO, including Issues in Focus articles, and in-depth updates on changes in Legislation and Regulations, and a large set of side cases with browser tables and spreadsheets for all cases is produced every second year. In years between the full editions, a shorter edition provides a smaller number of cases summarised in annotated presentation slides, with the standard set of AEO browser tables and spreadsheets containing the detailed modelling results. AEO2017 is a shorter edition of the AEO.