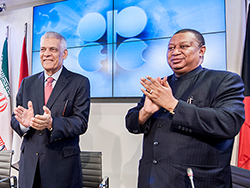 *HE Abdalla El-Badri (left) and HE Mohammad Barkindo, outgoing and new Secretary General of the OPEC.

04 August 2016, Sweetcrude, Vienna, Austria — The Organization of the Petroleum Exporting Countries, OPEC, has paid tribute to His Excellency Abdalla Salem El-Badri, departing OPEC Secretary General, following nine and a half years as head of the Organization. El-Badri’s term, which ended on 31 July 2016, is the longest in the history of the Organization.

Accolades were led by HE Mohammad Sanusi Barkindo, his successor as Secretary General, who praised the legacy he had left for the Organization, and acknowledged his position as an “icon of the global oil industry and respected around the world”.

El-Badri began his oil industry career with Esso Standard back in 1965, and in the intervening years he has been Chairman of the Libyan National Oil Company (NOC), Libya’s Minister of Petroleum, its Minister of Energy, Oil and Electricity and its Deputy Prime Minister, President of OPEC, and of course, its’ Secretary General.

Barkindo added that he had known El-Badri for almost 30 years and recalled the first time they met. “I was a junior member of a Nigerian delegation to Libya, and His Excellency was then head of Libya’s NOC. Despite his senior position, he made sure he welcomed and conversed with all of us. He was a humble man of great integrity, and he remains this way today.”

Other speakers from the Secretariat highlighted El-Badri’s leadership skills, his diplomacy skills, particularly in bringing people together, and the knowledge he has been able to impart during his almost decade leading the Organization.

El-Badri said it had been an honour for him to lead OPEC and thanked all of the Secretariat’s staff for their cooperation, dedication and support that had been extended to him during his time in office.

He said: “It has proved to be a challenging and fulfilling task, and I leave with many warm and positive memories, both professionally and personally, of a time I consider to be one of the highlights of my career.”

In a statement shared with staff, El-Badri also highlighted some of the challenges, successes, and advancements that had been achieved with their backing and assistance. “I believe we were able to guide the Organization through one of the greatest challenges of our generation: The Great Financial Crisis of 2008 and its aftermath. I believe we have considerably strengthened our research, which is now more detailed and more extensively shared. Our publications are widely disseminated and used by analysts and researchers the world over.

“I believe we have provided our Member Countries with more comprehensive and more specific analysis, information and data, and become a broader platform for extending dialogue and cooperation. I believe we now have a stronger and more respectful relationship with the international media. And I believe that we have been able to improve many of our internal systems and procedures for the benefit of staff.”

In welcoming his successor, El-Badri said that he was “leaving the OPEC Secretariat in good hands, as the Organization looks to further evolve and strengthen.” He added that “Mr. Barkindo had “a deep and long understanding of the Organization” and was sure this would prove to be beneficial in the years ahead.