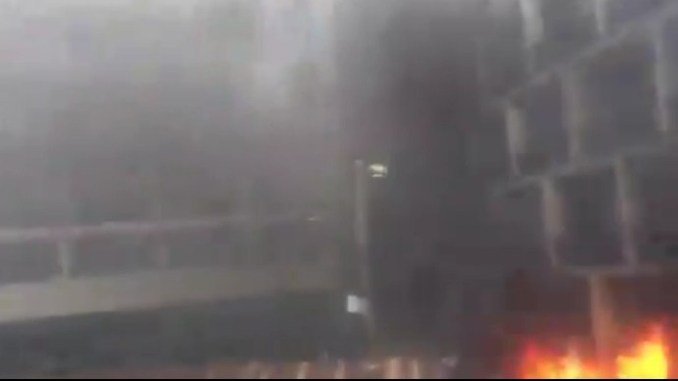 Lagos — There are indications that the invasion and subsequent vandalism and setting ablaze of the Corporate Head office of the Nigerian Ports Authority, NPA, last week has been viewed by the management of the agency as a sabotage from within.

Even though no official statement has been issued on the attack which was carried out in the wake of the civil unrest which tore through Lagos for about three days, insider sources hinted our correspondent that the management of the agency is already questioning some internal issues.

Different sources confirmed that the arsonists went from floor to floor and eventually landed in the office of the NPA’s Managing Director, Hadiza Bala-Usman, on the sixth floor where they ransacked the whole office and carted away different documents.

Our correspondent also confirmed that the hoodlums drove away with two Hilux Pick-Up vans, and that even though the NPA has a substantive Police Command, there was no alarm, no resistance and no call for assistance from security agencies while the building was under attack by the hoodlums and up to the time that it was set ablaze.

Some of the questions being asked as at last weekend are: Where was the Commissioner of Police, Western ports and his lieutenants? How did the hoodlums know the way to the office of the Managing Director? How did the hoodlums have access to the keys with which they drove the two vehicles away? Where are the vehicles now?

Some soldiers have since condoned-off the NPA headquarters following the incident.

Apart from the immediate reaction by the Chairman of the board of the NPA, Chief Akin Ricketts there has been no official reaction from the NPA to the incident.

Ricketts, in a statement, said while the youths have the rights to protest, it has become obvious that the peaceful protest was hijacked by criminal elements.

He cautioned that the destruction of a critical facility such as the NPA will affect the economic activities of the ports, saying as a largely import-dependent nation the port was a critical aspect of the nation’s economy.

Ricketts stated: “We strongly condemn this act of burning the Marina headquarters of the NPA. The NPA plays a critical role as a Federal Government’s parastatals in the maritime industry.

“The NPA belongs to all Nigerians and as an import-dependent nation, it is the port that feeds the whole nation. If they start pulling down critical structures of this nature where do they expect the government to get the funds to meet their demands?’’

When contacted, the spokesperson of the NPA, Mr Jatto Adam, informed our correspondent that the agency can only issue a statement after assessing the extent of the carnage.

“It is only when we resume on Monday, since the curfew has been relaxed. It is only after we have resumed work that we can actually see what had happened, it is after then that we can issue an official statement”, he said on Saturday.

An eyewitness had given a vivid description of how hoodlums who masqueraded under the EndSARS protest, gained access into the office.

“The hoodlums were more than 50, they came in with cutlasses, broken bottles, petrol, used tyres and petrol bombs. They were like they were drunk too, no one could stop them, we could not even go near them, they were ready to kill.

‘‘As soon as they came in, they started breaking the glass exterior decorations before setting the vehicles ablaze, they then gained entrance into the building.

‘‘Vehicles that were parked in the premises and the car park were burnt, while the expansive building was also torched.

‘‘Few members of staff who were on duty (security personnel) had to find other escape routes as the rampaging youths wielding dangerous weapons unleashed mayhem on the building.

Another eyewitness who pleaded to be anonymous told our correspondent that “the few security personnel on duty ran for safety because there was nothing they could do”.

When asked why they did not call for help, he explained that the best option was to call-in the NPA Police, but he added that there were no Police on duty.