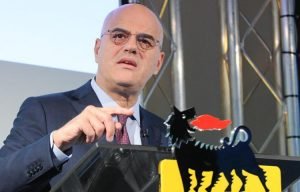 London — Eni may consider spinning off its biorefinery business and coupling it with retail operations as it is doing with its renewable assets, the Italian energy group’s Chief Executive Claudio Descalzi told Reuters on Tuesday.

“It’s really premature but it is a possible interesting deal for the future,” Descalzi said in an interview at the Reuters Events Global Energy Transition conference.

Several European energy companies, such as Spanish multi-energy company Repsol, are looking to divest parts of their green businesses to raise money to reduce debt and pay for the shift away from oil and gas.

“Biorefineries with retail… that could be a very good business,” Descalzi said. Eni has two biorefineries in Italy and has said it wants to build more at home and abroad.

Eni, which in February unveiled some of the most ambitious climate targets in the industry, is looking to restructure its business and portfolio to help fund the energy transition.

In May it signed an agreement with BP to merge upstream operations in Angola to form one of Africa’s largest energy companies in a move that will allow the new group to borrow without increasing Eni’s debt ratios.

Descalzi said Eni was open to partnerships with other companies similar to the BP deal, adding discussions were ongoing but without providing further details.

“We want to segregate this kind of investment and make a single entity with some other company that has the same kind of model in mind,” he said.

Asked about natural gas as a transitional fuel, Descalzi said he was convinced it would have a key role to play going forward.

“We have to replace coal first then oil… It’s still a very, very important fuel,” he said.

Eni, which is developing two bumper gas discoveries in Mozambique and Egypt, has said its oil production will peak in 2025 to be increasingly replaced, in its upstream portfolio, by gas.

In May ,the International Energy Agency said investors should not fund new oil, gas and coal supply projects if the world wants to reach net zero emissions by mid-century.