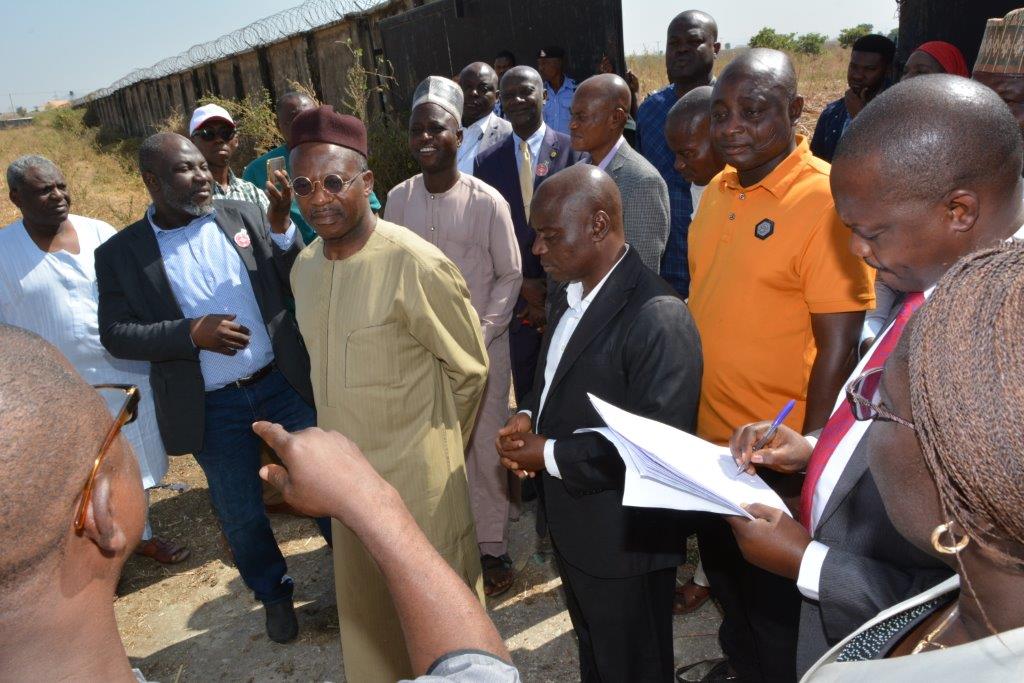 *Members of the Environmental Impact Assessment of the NNPC Independent Power Plant at the proposed site of the project in Gwagwalada, Abuja, for on-the-spot inspection.

Mr. Mahmud gave the commendation in Abuja during the Panel Review Meeting on the Environmental Impact Assessment (EIA) of the project.
He said the project was critical to the Federal Governmment of Nigeria given its numerous potentials to improve the power situation in parts of the country, while assuring his Ministry’s support towards ensuring actualization of the project.

“Let me seize this opportunity to commend the management of Gas and Power Investment Company and by extension, the Nigerian National Petroleum Corporation (NNPC) for this wonderful initiative. Certainly, this project is one of the critical infrastructures that the Federal Government is making judicious efforts to embrace” he said.

The Minister who was represented by Engr. Celestine Gomwalk said the Ministry, through the newly constituted EIA Panel, would ensure that only decisions that are of mutual benefits to all stakeholders would be considered, pointing out that the essence of the exercise was to guarantee sustainability of the Power Plant project.

In his presentation, the Abuja Independent Power Plant Project Manager, Engr. Benjamin Adah, stated that part of the objectives of the proposed project was to diversify and monetize NNPC gas revenue stream through power generation.

Adah noted that it was an initiative that would assist in reducing the current gas flare in the country.

He said the project would leverage on the existing huge natural gas resources from the NNPC Upstream and the proposed Ajaokuta-Kaduna-Kano (AKK) Gas pipeline to boost the nation’s revenue base and generate employment opportunities for the youth.

The Project Manager informed that besides generating 1350MW into the national grid, the project would help to decongest the over-voltage on transmission network coming from closely located power generating companies in the gas producing areas.

He said the project which would sit on a 54.7 hectares of land in the Gwagwalada area of the Federal Capital Territory would be co-financed by the NNPC and its strategic partner, GE/CMEC, with a combination of Debt-Equity sharing ratio of 70%:30%.

Engr. David Abang of the Research and Development Division of NNPC, which is the Project Consultant, stated that a lot of research and effort had been put into developing the Environmental Impact Assessment (EIA) of the project, stressing that a lot of similar projects had failed for lack of proper EIA study.

He said the host community, Dukpa in Gwagwalada Area Council of the FCT, was carried along in the course of conducting the EIA activities.
Earlier in his remarks, the Chief of Dukpa, Alh.Yinusa Gwamna, said the community was impressed by the way the NNPC Group carried the community along so far in the course of developing the project, adding that he looked forward to a sustained relationship.

Chairman of the EIA Panel, Prof. Sabo Ibrahim, said the project could not have come at a better time than now, stressing that the review meeting was to identify and assess associated and potential impacts of the project on the environment.

He assured that the panel would carry out a painstaking review and come up with recommendations that would aid the Minister in taking informed decision on the project.

Other stakeholders present at the exercise were Abuja Environmental Protection Board (AEPB), Nigerian Electricity Regulatory Commission (NERC), and researchers from University of Abuja, Ahmadu Bello University, Zaria, and Nnamdi Azikiwe University.
The highpoint of the event was a visit of members of the panel to the proposed project site for on-the-spot assessment of the environment.