on: January 24, 2015In: Community Development, featured 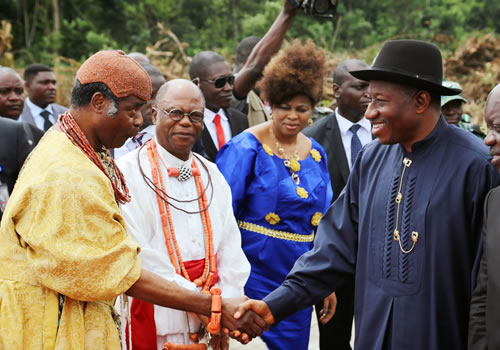 President Jonathan with the Olu of Warri, Ogiame, Atuwatse II.

Sources at the closed door meeting disclosed that the visit was for the President to gain Itsekiri leaders’ confidence and support for next month’s elections and appeal for calm over ethnic conflict generated by the stalemated Export Processing Zone, EPZ, sited in Ogidigben, Warri South West Area of the state.

The visit is coming days after the Itsekiri Leaders of Thought, ILT, vowed to vote against him if he fails to do the groundbreaking for the $16 billion EPZ which the President reneged on last year following protest by Ijaws of Gbaramatu Kingdom.

The President on arrival had first visited Pastor Oritsejafor at his GRA, Warri residence before leaving for the Olu’s Palace in company of the CAN President and Governor Emmanuel Uduaghan.

A source who participated at the meeting disclosed that Jonathan profusely begged the Itsekiri monarch and his subjects to be patient while he liaises with the Petroleum Minister on a new specific day to flag off the EPZ project.

The source added that the Preside denied before the Itsekiri people that his call-off of the EPZ groundbreaking November 25th last year was forced by threats from protesting Gbaramatu folks.

“President Goodluck Jonathan told the Olu of Warri that before the end of Governor Emmanuel Uduaghan’s administration he will perform the groundbreaking ceremony. He explained that the earlier date was put off because it was too short to consult with stakeholders.

“According to him, he does not want a situation where the project will cause bloodshed between the people of Itsekiri and the Ijaw who have been living peacefully until the project was relocated to Ogidigben,” the source disclosed.

It was gathered that though the President was economical in soliciting partisan support for next month’s presidential election, he however promised a return to the Olu Palace February 4th to discuss politics and the place of Itsekiri when re-elected.

The city of Warri and adjoining neighborhood were heavily militarized as a result of the visit as all routes leading to the palace and residence of Pastor Oritsejafor were barred to traffic from morning till departure of President Jonathan, resulting in serious gridlocks in all motor able detours.
*Egufe Yafugborhi – Vanguard