ERA, others seek Shell recognition as accomplice in Saro-Wiwa’s death 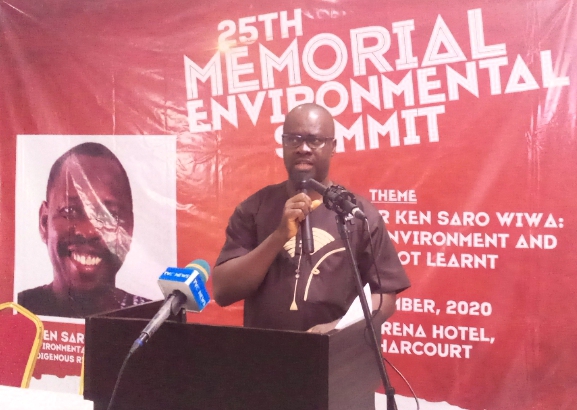 Port Harcourt — Civil society groups around the world, Thursday, said Shell must be recognized as accomplice in the execution of Ken Saro-Wiwa, urging the company to work with the government to exonerate the Ogoni leaders executed in 1995.

This was the resolution reached at the end of the 25th Memorial Environmental Summit in honour of Ken Saro-Wiwa, organised by the Environmental Rights Action, ERA In Port Harcourt, Rivers State.

The CSOs maintained that failure to exonerate Ken Saro-Wiwa, Shell should decommission its facilities from Ogoniland and the Niger Delta, and vacate the country.

Acting Executive Director of ERA, Chima Williams, speaking on the theme, 25 Years After Ken Saro-Wiwa: The Nigerian Environment and Lessons Not Learnt; urged the government to accelerate the clean-up of the devastated Ogoni environment and the entire Niger Delta.

Williams on behalf of the CSOs also called for a judicial panel of inquiry to revisit the murders of Ken Saro Wiwa and the arbitrary arrests, maiming and killings that forced many Ogoni indigenes to flee into exile.

The resolutions are, “The Nigerian Government immediately exonerate the late Ken Saro-Wiwa and his Ogoni compatriots of the false allegations for which they were unjustly and brutally murdered.

“Nigeria pays the Ogoni nation an ecological debt for decades of pollution, neglect of their polluted environment, displacement of her people and denying them justice.

“The Nigerian government halt the construction of a prison yard in Ogoniland and instead, support the plans by Ogoni people for a Ken Saro Wiwa Memorial Park and the construction of a Research Center of Excellence and other emergency measures recommended by the UNEP in its Assessment report.”

The Civil Societies also called on the Federal Government to direct the Nigerian Customs Service to release the Ken Saro-Wiwa memorabilia, which has been confiscated since 2015.

” Immediate release of the Ken Saro-Wiwa Memorial Bus seized for no reason by the Nigerian Customs Service (NCS) in 2015.

“The Nigerian government immediately halt the drift to full blown tyranny occasioned by the growing cases of suppression of the rights of the people of the Niger Delta, activists across the entire Nigeria, as well as the harassment and use of state apparatus to stifle peaceful protests like has been observed with the #ENDSARS protests”